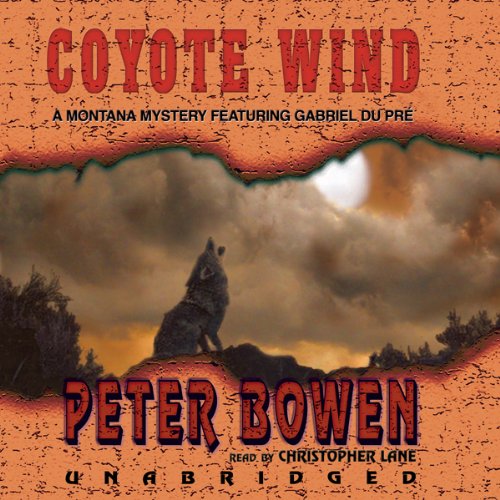 In the desolate hills of the Fascelli family ranch, a skeleton has been discovered. The sheriff needs Du Pre's long experience in Montana to identify the bones. What Du Pre finds leads him on a search through the history of a troubled family, a search that brings him closer to a secret from his own past. Along the way, Du Pre meets a range of interesting folk, some to his liking, some decidedly not.

"Gabe's rhythmic, regional voice and his sly wit take the novel to another level....Let's hope Bowen...finds time to give us many more Gabe Du Pre adventures." (Booklist)
"The great story and narration make this a most enjoyable production." (Kliatt)

One of my new found favorites

The dialog in these stories is as good as it gets. There is humor that has you laughing out loud, there is touching fondness that pulls at your heart and there is mystery. This is the first book in the series and we are introduced to the genesis of some of the important people in the following stories, it is here someone should start with the author and the series. I live in the west in a small town and the people and the hardships faced are real and beautifully described. I have read some of the reviews that are a little upset with the dings in the story directed against the urban influence in the rural west, in particular California. If you are an urban Californian and to thin skinned to be the butt of some jokes then you should go back to, well, whatever urban Californians do. If you are interested in great literature written in beautiful and unique style this will be a series of books you will love no matter where you are from.

I'm not sure what I was expecting with this. Listened sort of experimentally, wondering if, being an eastern city slicker, I could relate to it. I'm so happy I took the chance! This book was a gem!

Gabriel Du Pre, part french, part Indian, knows Montana in his bones. He is a cattle-brand inspector, but occasionally reluctantly steps in as an extra hand in law enforcement. This story involves the mysterious (and old) plane wreck that is discovered, and how it brings Du Pre to solving a mystery surrounded with that, but also a surprising one about his own past.

Good mystery, but there are plenty of them around. This was at times very serious, as Du Pre contemplates his philosophy of life, and sometimes humorous as he lives by his own philosophy. He has wonderful relationships with his daughters and his girlfriend, and others, and they all love him in return.

I felt I had stepped into a mindset and lifestyle I understand little from my own perspective, but that felt so genuine, it almost made me wish that I could live with such simplicity, such authenticity of living, as Du Pre, who simply follows his own inner code of ethics throughout.

I felt this was a wonderful book, that does not completely yield to trying to explain its great appeal. I truly recommend it, and plan to download some more in the series.


4 of 4 people found this review helpful

This is the first audio book I could barely stand to listen to. The narrator had such a flat voice that you couldn't tell who was supposed to be speaking. There was no inflection at all and I was bored almost to sleep. I think I would have enjoyed the story much better in print. Disappointing.

Is a Pig's Prick, Pork

I am following a guy who turned me on to Black Cross, Child 44 and Daemon. This book is good and well worth four stars, but I did not love it as much as the fisherman I follow.

I do believe a lot of people will love this and if you don't love the main character, then you haven't a heart. The main character here is one of my favorites of all characters. Although I wonder, do Modern Native American Indians really talk in the broken English this character uses? I don't know, being from the Midwest. It did take me a while to get into this character and the book. This book is more about the people then it is about the mystery. Mystery lovers will be disappointed. Some questions never get answered and some things fall into place too easily. Nor are you the reader given any clues to come up with the answer on your own. Some may find this a little slow moving. My wife and I listened to this together and she is a big fan of Tom Clancy. She thought it was slow and she did not like the unanswered questions.

The narrator is excellent, although, I had problems in the beginning, in knowing when the main character was speaking out loud or thinking in his head. I am not sure if this is the narrator's fault or if it is the writer.

14 of 22 people found this review helpful

Christopher Lane did a brilliant job narrating this story. I lived in the book for the 5 plus hours. This was a great story and performance. I will be working my way through the rest of the stories in this series.

loved it, great time a pleasant take.. would recommend to all that love the history..

Bowen's series features Gabriel a Metis fiddle player, his family, friends, life and living, and crime solving. I found this series by accident, it challenges my preconceptions and reminds me to walk a mile in others shoes.

You won't want to miss the simple mystery solved by a Brand Inspector. Reluctant to help with a homicide investigation Native American Dupre just wants to do his job "working with cattle butts". His home life is simple; he's taken care of by his two daughters and his girlfriend. They tell him what to do and he does it. Some cattle and a dog. Dupre see things simply and helps people he likes and let's the ones he doesn't die.

Swearing doesn't take the place of other words

I understand the use of swearwords. But the amount of them in this book is amazing. The story was fine and the reading was OK. Don't recommend it.

Found it to be boring.

Sorry, not my kind of story. I had a hard time getting thru this one and found that there was to much bad language for my tastes. Would not listen to another one from this author.

1 of 5 people found this review helpful