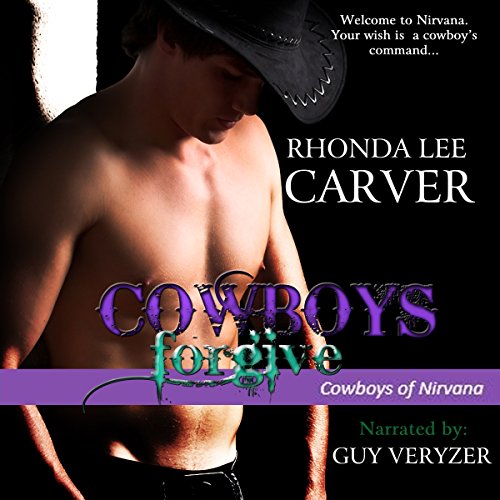 Taking a dirt bath off a bull lands Jace Jackson into the hands of beautiful, smart, sexy country singer Jessa Garvey. In pain and loopy on pain meds, he has no clue he's flirting with her, and making a big damn fool of himself. Back in high school she rejected him, and although years have passed, sometimes a cowboy can't forget. When Miss Priss invades his space at Nirvana, he decides to give her a dose of her own medicine and puts her to work mucking stalls. That'll teach her….

Trading her guitar for a shovel, Jessa is out to prove to Jace that she isn't the same person she was as a teenager. As far as she's concerned, he'll forgive her even if it kills her, or lands her hot and willing in bed with the dangerously handsome cowboy.

Forgiveness is granted, but she isn't prepared for the choices she must make. Has she changed enough? Does the sliver of selfishness remain?

What listeners say about Cowboys Forgive

Jessa is a famous country singer and Jase is a former bull rider-now ranch hand. They knew each other twelve years ago in highschool, but that is a sour memory for Jace. Jessa turned down his invite to the prom. Now a chance encounter brings them together and Jace sets out to prove that Jessa is just a spoiled city girl. Except, maybe she isn't. Fun, flirty and sexy book. I liked how both characters grew and changed by the end. Narration was easy to listen to and fit the story well. I received this free copy audiobook at my request and have voluntarily left this review