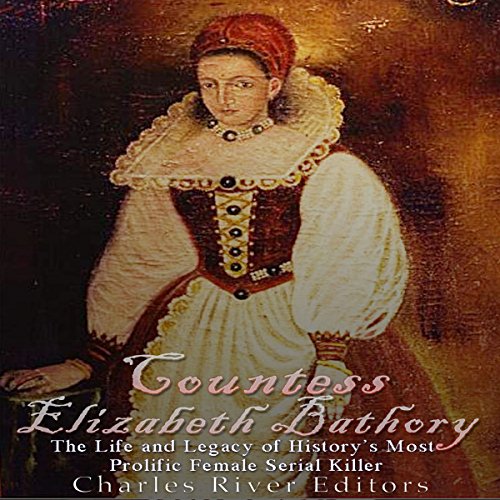 The Life and Legacy of History's Most Prolific Female Serial Killer
By: Charles River Editors
Narrated by: Mark Norman
Length: 1 hr and 34 mins
Categories: History, European
2 out of 5 stars 2.0 (1 rating)

The legends of vampires like Dracula have generated massive interest throughout time. Indeed, the story of a man (in some versions a very handsome, dashing man), who feeds on the blood of virgins in order to survive, and who walks the earth only at night, has been revived throughout the centuries in different forms. However, one famous tale that has been lost among the legends is the story of a female Dracula, an educated woman from a well-known family of 16th century Hungary who was so afraid to lose her beauty and young looks that she engaged in dangerous practices, combining witchcraft with exsanguination.

Countess Elizabeth Báthory is this female Dracula. She is said to have drained the blood of approximately 600 young women, in order to drink it, spread it all over her body as a nurturing blend, or simply to bathe in it. Her preferences for such practices can be explained by several factors, including the practices of the time as far as torture was concerned, her genetic heritage, personal madness, and the fear of fading beauty.

Despite the general impression that Báthory was exsanguinating these girls and bathing in their blood, it appears that she did much more. Sources indicate that most of the girls had been beaten, tortured, and even forced into particular sexual activities. Regardless, her attempts to do anything to keep her beauty apparently went for naught, because upon her death, Báthory was no longer the beautiful and young woman she desired to be. In essence, it seems that all her criminal efforts had been in vain.

Based on her behavior and the reactions to it throughout time, it is virtually impossible to set Erzsébet Báthory in a character typology. On one hand, she could be considered a bored wife left alone by her husband for long periods of time, time that she used to develop passions for same-sex relations and an acute interest in inflicting pain on her victims. She might be seen as a mentally unstable person who found great joy in torturing others. Perhaps most disturbing of all, there's a possibility that the countess was a common character within the nobility of the 16th century who was acting normally based on the customs and norms of her era.

Adding to the mystery of the story is that historical records are still mostly inaccessible because of the language barriers (most historical sources are in Hungarian). As a result, researchers interested in her life story and history usually rely on a limited number of available sources, such as biographies, articles, published letters said to have belonged to her, and scholarly articles on the topic.

It is a short book with lots of references, but as an audio book not really worth it.