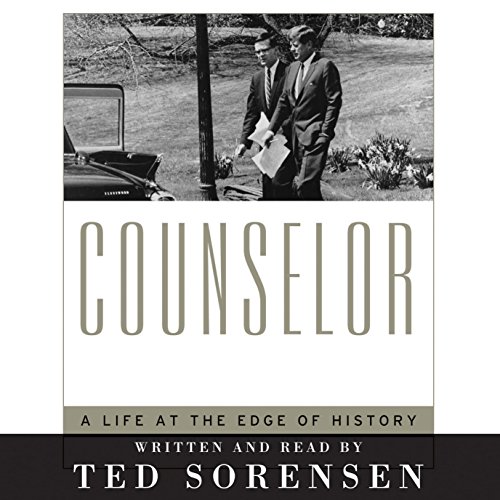 In this gripping memoir, John F. Kennedy's closest advisor recounts in full, for the first time, his experience counseling Kennedy through the most dramatic moments in American history.

Sorensen returns to January 1953, when he and the freshman senator from Massachusetts began their extraordinary professional and personal relationship. Rising from legislative assistant to speechwriter and advisor, the young lawyer from Nebraska worked closely with JFK on his most important speeches, as well as his book Profiles in Courage.

Sorensen encouraged the junior senator's political ambitions - from a failed bid for the vice-presidential nomination in 1956 to the successful presidential campaign in 1960, after which he was named special counsel to the president.

Sorensen describes in thrilling detail his experience advising JFK during some of the most crucial days of his presidency, from the decision to go to the moon to the Cuban Missile Crisis, when JFK requested that the 34-year-old Sorensen draft the key letter to Khrushchev at the most critical point of the world's first nuclear confrontation.

After Kennedy was assassinated, Sorensen stayed with President Johnson for a few months before leaving to write a biography of JFK. In 1968 he returned to Washington to help run Robert Kennedy's presidential campaign. Through it all, Sorensen never lost sight of the ideals that brought him to Washington and to the White House, working tirelessly to promote and defend free, peaceful societies.

Illuminating, revelatory, and utterly compelling, Counselor is the brilliant, long-awaited memoir from the remarkable man who shaped the presidency and the legacy of one of the greatest leaders America has ever known.

"Ted Sorensen's Counselor is that rare gift to history: an account of mighty events by a participant who stood at their heart, and a writer masterful enough to make us understand them as well." (Robert A. Caro)
"This clear-eyed but loving memoir is fascinating." (Walter Isaacson)
"Ted Sorensen's words inspired a generation, and his counsel and judgment helped steer our nation through some of its most difficult hours....Sorensen has written a book that will be cherished for generations." (Barack Obama)

What listeners say about Counselor

This is my favourite biography

I've read/listened to a lot of books about this period of time and this is by far the most detailed, informative and interesting.

This is a rare chance to go back in time and go inside the White House during the JFK's administration and Washington. The story of the Cuban Missle Crisss is worth the purchase of the book. The different stories told within the book are fascinating and very personal. A great book. It was nice having Ted Sorensen read the book, at times the delivery was a little slow.

First, this book starts VERY slowly. It sounds like your grandpa struggling to read aloud - Mr. Sorensen speaks in a tired voice. But stick with it - there really is some interesting insight into the Kennedy years. A good read.

I really enjoyed hearing Sorenson's personal accounts of such an interesting, and tragically short, portion of American political history. He doesn't stray too far from what we already know about key events during Kennedy's presidency, and there are certainly no "bombshells," if that's what you're looking for. Just a great first-hand counselor's perspective for anyone interested in politics.

A must if you want to know Camelot from a real insider.

Ted Sorensen wrote some of the most recent inspiring speeches of contemporary America, which came to be immortalized by being delivered by the late President Kennedy. This book is every page up to the outstanding counselor he was. A gripping lecture, a page-turner from start to end, for those interested in knowing about Camelot.