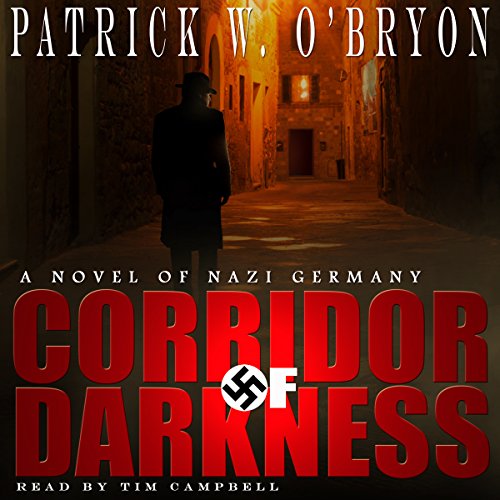 Two desperate fugitives face a nightmarish pursuit across the Third Reich, where violence and deception are tools of the trade, and torture and death wait at every turn... 1930's Berlin - unrestrained, decadent, torn by political and social strife - and dashing Ryan Lemmon intends to make the most of every moment. The young American reporter loses himself in the dark underbelly of the capital, only to have a violent death bring him face-to-face with the growing menace. As Hitler's stranglehold grips the nation, Ryan becomes involved with a spirited German blonde, but her relationship with a sadistic Nazi powerhouse puts them both at risk of an agonizing end. Having already lost one friend to Nazi brutality, Ryan and his former flame must now escape the all-powerful Gestapo. And she agrees to steal intelligence which can save the lives of millions, but only if it reaches the right hands in Washington.

Inspired by the contemporary journals of the author's late father, Corridor of Darkness evokes the cruel heart of pre-World War II Germany, where any missed beat could be the protagonists' last.

What listeners say about Corridor of Darkness

Awful waste of my time and money. The plot is unbelievable and unsatisfactory. I just wish I hadn't bothered with it.

Low Expectations, but I really enjoyed this! Highly recommend for anyone who likes the era and the genre. Says Book 1, hope it is a series as story starts pre WW2 in mid to late 30's. Really looking forward to the next installment, reminds me of Furst and Kerr,

a great thriller in the tradition of Philip Kerr that keeps you in suspense right to the end. Patrick O'Byron has a great future ahead of that we can be sure!

What would have made Corridor of Darkness better?

I liked the narrator so much in this book, that I actually bought the second in the series (there are three total). Tim Campbell's pronunciations, enunciation and character voices were all remarkable. As far as the story goes, it was just so-so. While entertaining, it pales in comparison to the WWII stories written by Philip Kerr. I will not buy book three or any other by Mr. O'Bryon. There are much better writers out there.

You can tell the author did extensive research into the era. The attention to detail really places the reading in the story and atmosphere. You can feel the tension and brutality of war.

Rene, I easily relate to his personality and actions.

Which character – as performed by Tim Campbell – was your favorite?

Ryan, through the narration you can feel that you are in the story, that Ryan is talking to you.

Without giving anything away, the Rene and Horst scene is the most riveting and crushing.

Scene Setting To A Fault

This story starts out very slowly as the author falls in love with the act of scene setting...for a long time. As the book progresses though, you get to a story which ends up being quite entertaining...if you like WWII intrigue, I think you will ultimately enjoy this book...just be patient!

Over the decades I've read numerous nonfiction accounts of Nazi Germany (the most recent being ``Hitler's First Hundred Days'' by Peter Fritzsche). While nonfiction is informative, sometimes a fictional account conveys more of the emotional impact of what living in the time period was like. ``Corridor of Darkness'' is such a novel. The characters are sharply drawn as is the time period. I found myself taking long evening walks so I could continue to listen and not lose the momentum of the narrative pace. The reader does excellent work in his portrayal of the many characters.
A final note: As I finished the book last night, in listening to the afterword, I was pleasantly surprised by the author's comment on the events that caused him to write the novel.
I look forward to listening to the next two books in the series.

The plot is very interesting: a young American working in Nazi Germany for the US State Department and involving himself in rescuing an ex-lover married to a brutal Gestapo chief. There is much interesting detail about everyday life in Germany, the streets, the food, the people.
What I didn't like was the superficial style full of "airport book" metaphors and sensationalist turns of phrase. Disappointing

Kind of an anti-climax, but OK

Which character – as performed by Tim Campbell – was your favorite?

Campbell does a great job with different accents and voices. Very enjoyable.

I'm not sure I'll anything else by O'Brien, maybe when he matures as a writer