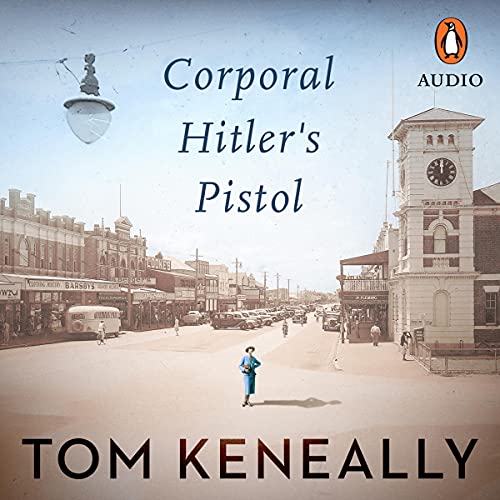 By: Tom Keneally
Narrated by: David Tredinnick
Try for £0.00

After an affluent matron of Kempsey, NSW, spots a young Black boy who looks just like her big man-in-town husband, not only does she scream for divorce, attempt to provide a comfortable life for the child and turn her life around, but the whole town seems drawn into chaos.

A hero of the First World War has a fit at the cinema and is taken to a psychiatric ward in Sydney, his Irish farmhand ends up dead, and the gay piano-playing veteran who is secret friend to many in the town is implicated. Corporal Hitler's Pistol speaks to the never-ending war that began with 'the war to end all wars'. Hitler's pistol from the First World War continues to traumatise our war hero; his son takes it, and it becomes the murder weapon of an Irishman escaping the Irish wars.

Rural towns and societies have always been a melting pot, and many communities are happy to accept the differences of people, as long as they don't overstep. Set in a town and community he knows very well, Tom Keneally tells a compelling story of the interactions and relationships between Black and white Australians in early 20th-century Australia.