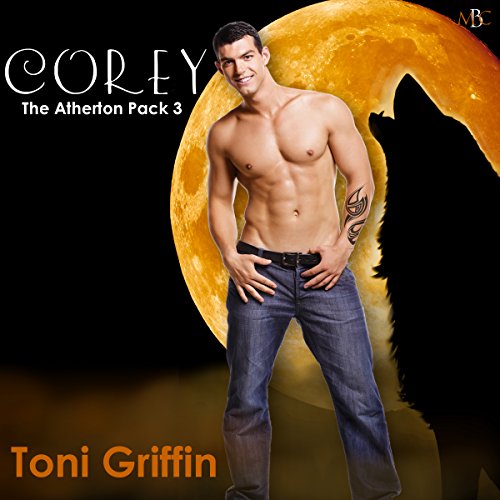 By: Toni Griffin
Narrated by: Nick Flint
Try for £0.00

Corey Jones has always maintained he didn't want a mate. After falling for his college professor and having his heart broken, he vowed to never go there again. Now, his decision to remain single is put to the test when he meets his Alpha's new personal assistant, Ethan Davies, and discovers the man is his mate.

After growing up in the foster care system, all Ethan ever wanted was a home and someone to love him. He's overjoyed that his recent move has brought him to his mate. Ethan's happiness soon turns to devastation when Corey walks away from him and their bond.

Ethan is forced to walk a fine line between respecting his mate's wishes and refusing to give up on the one thing he's wanted his entire life. With Ethan's determination, an interfering brother, and pack members too interested in his personal life, Corey may not stand a chance.

What listeners say about Corey

What was one of the most memorable moments of Corey?

One of my most memorable moments in this book is when Corey finally realises that as his mate Ethan would never hurt him, so he finally opens up to love

Which character – as performed by Nick Flint – was your favourite?

This book made me laugh quite a bit, this pack is just hilarious.

I cannot wait for the next audiobook in this series.

What made the experience of listening to Corey the most enjoyable?

The way Corey so valiantly tried to ignore the mating bond, only to realize that Ethan truly was the right path for him. Also, I loved how patient Ethan was with Corey, fully understanding the reasons behind his mate's hesitation.

Oh, hard one. Can't I pick both Corey and Ethan?

Everything. I've said in an earlier book in this series that this is my first audiobook with an Australian accent and it's like sitting and listening to Hugh Jackman which is amazing.

It was and I did. I have been devouring this series book by book and I cannot wait to start book 4.

Ethan is looking for a future and a family. Corey had given his heart once and wasn't willing to but it out there again. But fate steps in. It was fun to see them dance around the issue each trying to move in one direction or the other. Great story with less outside drama.

Not a fan of the narrator

I like Toni griffin's stories. But the narrator is not selling this series. It ferls like he's rushing through the book and its pretty monotone. I didn't feel the connection between the main characters like I should have. Not sure if that was the story or the narration.