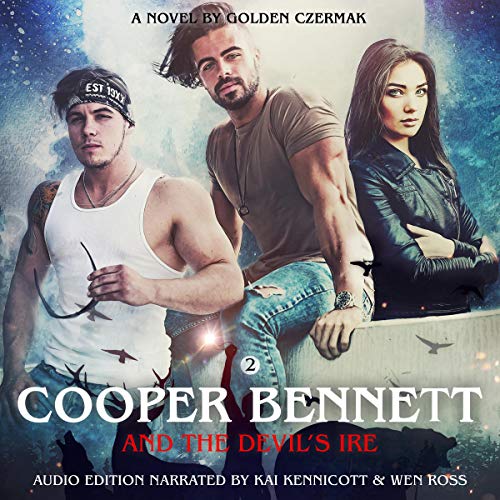 Cooper Bennett and the Devil's Ire

Cooper Bennett and the Devil's Ire

The Bear Kingdoms of Louisiana are on the brink of war, sparked by the sudden appearance of a mysterious amulet in the swamplands. Adding to the problems, troops from a demon army called the Noctis begin laying waste to the bayou.

Back in Georgia, Cooper Bennett’s not-so-secret life is quickly becoming a mess. The alpha power within him is taking a toll while the two loves of his life - Alyssa Noble and Billy Arnett - are dealing with drastic changes of their own.

As the Southern conflict spreads, threatening to engulf shifter and human communities alike, fate brings all these disparate groups together to combat the darkness.

Can such an unlikely alliance succeed in saving everything they hold dear, or will their differences be enough to unravel what little hope and time remain?

Getting better and better

The relationship between the characters is great. You can really feel the bond between them. This makes all the difference between a good book and a great book. Looking forward to the next instalment in this series. The narrators really do bring these characters to life do so well.

A great story and excellent continuation of the story! I've waited for this to come out and was not disappointed. Wen Ross and Kai Kennicott are great narrators and brought a new dimension to an already good story. Don't miss this one.

Cooper Bennett and the Devil's Ire was another great read by Golden Czermak. Cooper, Alyssa and Billy are dealing with the drastic changes in their life. Cooper has an alpha power within him that takes a toll on everyone. I loved reading more about Cooper's story. Kai Kennicott and Wen Ross did an amazing job narrating the story.

Golden Czermak is a wonderful storyteller. He never disappoint. Neither does the narrators. The narrators brought Golden's words to life. I always enjoy whatever Golden writes and this is among my favorite of Golden's. One of my favorite scenes is when Billy started his change over. I know how Cooper was so broken up about his injuries.

Oh the wait is going to kill me

Golden did an amazing job bringing back all the characters from book 1 and getting us more involved with the story. However I’m crushed that we have to wait again for the next instalment. I’m really loving this series and cannot wait for the next book.

As always Wen and Kia were daunting characters and I can’t wait to check them out again and more fully.

I love this series. Golden and his amazing team of narrators make this book brilliant. I can’t wait to read/listen to the next book in this series.
Personally I have a little trouble with unique character names and sometimes I have to stop and think about who’s who. That being said, I wouldn’t want to read boring names either, like, John & Jane Smith lol.
I highly recommend this series to anyone who loves shifters & paranormal.

Golden Czermak does it again!

Wow, my mind is spinning. I feel like I have been on a rollercoaster that has so many twists and turns that I never saw coming. Golden's imagination is beyond words. Don't think you can figure out what is going to happen next. Even at the end there are so many possibilities of what is to come in the next book. There were so many jaw dropping and emotional moments. Enjoy the ride!I

Wen Ross and Kai Kennicott excellently take the listener into this world of drama.

Golden has written another exciting story. It has shifters, talisman and a path with plenty of magic. Cooper and his friends run across obstacles that have to be dealt with. Wen Ross and Kai Kennicott are the perfect combination to bring this narration to life. Exciting adventure!