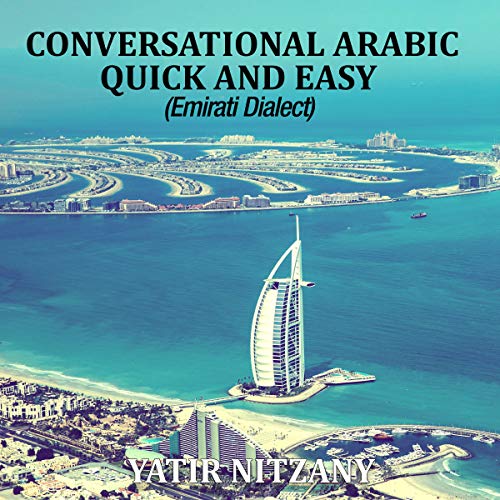 This audiobook doesn't contain any Arabic letters! All Arabic words in this audiobook were written in English transliteration!

Have you always wanted to learn how to speak the Emirati Arabic dialect but simply didn’t have the time?

Well, if so, then look no further. You can have one of the most advanced and revolutionary methods ever designed for quickly becoming conversational in a language. In creating this time-saving program, master linguist Yatir Nitzany spent years examining the 27 most common languages in the world and distilling from them the 350 words that are most likely to be used in real conversations. These 350 words were chosen in such a way that they were structurally interrelated and, when combined, form sentences. Through various other discoveries about how real conversations work - discoveries that are detailed further in this audiobook - Nitzany created the necessary tools for linking these words together in a specific way so you may become rapidly and almost effortlessly conversant - now.

If your desire is to learn complicated grammatical rules or to speak perfectly proper and precise Arabic, this audiobook is not for you. However, if you need to actually hold a conversation while on a trip to Dubai or Abu Dhabi, to impress that certain someone, or to be able to speak with your grandfather or grandmother as soon as possible, then the Nitzany method is what you have been looking for.

This method is designed for fluency in a foreign language while communicating in the first-person present tense. Nitzany believes what’s most important is actually being able to understand and be understood by another human being right away. Therefore, unlike other courses, all words in this program are taught in English transliteration, without having to learn the complex alphabet. More formalized training in grammar rules, etc., can come later.

This is one of the several in a series of instructional language guides. The Nitzany method’s revolutionary approach is the only one in the world that uses its unique language technology to actually enable you to speak and understand native speakers in the shortest amount of time possible.

Learn the Arabic dialect of the United Arab Emirates today, not tomorrow, and get started now!

A great resource for a rare language/dialect

I had low expectations since this was not from a big publisher, and I was at first a little put off by the errors in English tense and pronunciation, but as far as content goes, this was exactly what I was looking for.

The book is composed of useful generalisable language chucks like "tell him that" "even if" "sometimes" "in that place" "at that time", "without", "still", "always" and so on. Grammar is explained casually, as and when necessary.

With the focus on very general function words and phrases like these it is - similar to the Michel Thomas method - easy to generate plausible sentences with minimal specific content. it gives the good advice of pushing this generative potential of the phrases in ones own mind, after assimilation.

I am myself a more advanced student who benefited from the audio materials in gaining a little more familiarisation understanding the most common phrases by hearing. The website has been slow to respond to my request for the advertised fre digital book, which I need for reference, but I have been happy with the purely audio copy all the same.

Excellent for conversational use in the UAE. I used it for several days while traveling there. Narrator is a native Arabic speaker and is extremely clear in her pronunciations. This is a great deal for the money. I will keep using this audio on my next business trip to Dubai.

I thoroughly enjoyed this book and will highly recommend it to lovers of the emirati dialect. Made me think a lot of how I waisted my time all these years with other programs.

I lived in Qatar in the before and would occasionally travel to UAE. It’s fantastic for travel.

Great book. Always a good experience when buying in the Nitzany Arabic series. Hopefully more of his kindle titles will be converted into audio format.

This combined along with Nitzany's Syrain manage to be relatively interesting. What a great series. Next I will purchase the paperback version. Besides Arabic I also got Italian.

The idea to combine most usable words of this Emirati dialect is worth praising, it is definitely a result of hard work, and the small sentences after each collection of words is building confidence to speak the small sentence.
Some specific recommendations for the writer are:
On Excercise 7 (seventh collection of words page)
The translation of : " Its easy to find this place" is "Sahl telga Hatha Ilmikan"
On top of this page the arabic word for "To find" is "Yilga"

Kindly provide a note on changing the word from Yilga to Telga.

Rest is ok. Great effort i must say!!

This book is perfect

I just got this book today and I already really enjoy this book it's a great book for a beginner to learn Arabic especially if they travel to the Emirates.

If you want to learn Arabic dialects then these books are the way to go.

I highly recommend this for any and every language lover. As an avid language learner I always enjoy these type of books.

One of the better Arabic books I have seen. After so long looking for a good source for Emirati dialect this is beyond perfect I heard I can use it in Iraq as well since the dialects are extremely similar.