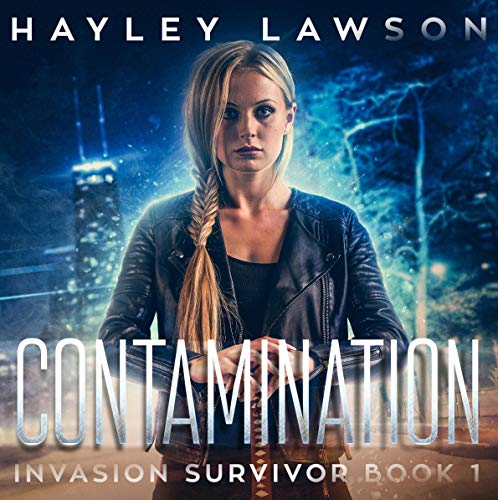 By: Hayley Lawson
Narrated by: Keira Stevens
Try for £0.00

Humanity has one option. Evacuate Earth. After a wave of fear crashes over the world in response to a deadly virus. Fear intensifies when it's discovered that the virus is the first wave of attack by an alien race that wants Earth for themselves.

Its one day before Paige's 21st birthday, and the world is turning into the walking dead! Zombie-like people are seeking her out. What the hell! Just Paige's luck. Can Paige rescue her family and get off the planet before The Wave captures her?

What listeners say about Contamination

A fun YA read

I really enjoyed this book, it may have been aimed at a younger audience, but I still got swept away in the story. It was a great premise, the characters engaging and I just didn't want to put it down.

Ok now I can’t wait for book 2, I want to say thank you to Hayley for making audiobooks. I so love to read & with things changing in my life audiobooks are the only way I get to do what I love. I know it’s not cheap & I wanted to say Thank you.

A great YA book

I was given this free audiobook at my request and have voluntarily left this review so that others may have a clear idea on what to expect. As im not a huge fan of this genre I would have never have just chosen this book to read so I am very suprised at how much I enjoyed it. Not only was it a good book but the narrator was the first female narrator that I have been able to listen to. Definitly worth the read!

This is the first book by this author that I have read and OMG wow! This book is perfect even for the younger readers because it is clean. The characters and stories are well written and the narrator did a great job. I was given this free review copy audiobook at my request and have voluntarily left this review.

What a great story!

I thoroughly enjoyed this well written and beautifully narrated tale. I'm definitely looking forward to the next installment.


A very good story went have a very fast. phase. Characters and story well written. I let my young niece also read this story because it is clean.

took a little bit to get started but once into it was a good book.
thank you for the book code to get this.
will be getting book 2 soon.

I wish the main character was more mature and open to the truth in front of her because it’s a good story. She is such a skeptic its so annoying. I read some Comments about the book two and she apparently is still the same way she doesn’t believe her mother and is skeptical and immature so I’m stopping here. I have no desire to read book two.