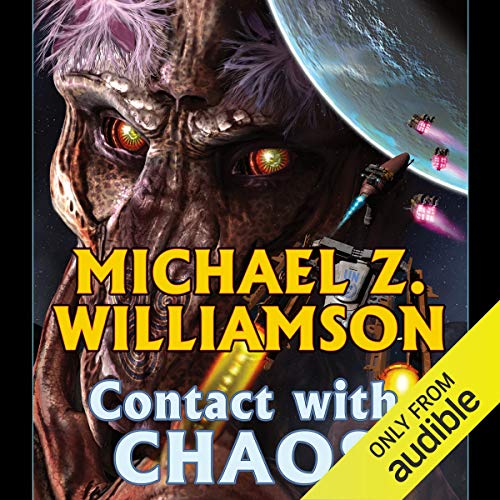 By: Michael Z. Williamson
Narrated by: Stephen Bowlby
Try for £0.00

The Galactic Rumble Is On! First contact with an alien species - and, surprise, the human race is far from united. The Freeholders want trade. The U.N. wants to manage. The eco-warriors want "purity" at all costs. Humans - you gotta love 'em! Once again, a historic meeting between potential friends is about to turn into a free-fire zone! A stand-out entry in the Freehold saga by Michael Z. Williamson, co-author with New York Times best seller John Ringo of Posleen War hit, Hero.

At the publisher's request, this title is sold without DRM (Digital Rights Management).

This is is the fourth book in the Freehold series.

it is refreshingly unique from the other Freehold books in that it is a hard sci-fi novel, but then again no two books within the Freehold series is alike.

The book is hard sci-fi, but lacks the entrance fee of a hard science hobby. The story is thought provoking, what would to civilizations marred by war, but refusing to be defined by it do when they meet a second sentient species?

An all around good read and re-read.

Quite good a bit of a departure for Williamson

I enjoyed this quite a bit.

The Freehold having to reign in companies somewhat was interesting

I've loved the Freehold Series for years, but somehow I missed THIS book until now. I've followed Mr. Williamson's Books for a LONG time, and knew he was going to make his mark on Sci-Fi almost from the start. I've talked with him several times in the past and several things were very clear within the first 5 minutes of conversation... He has a DEEP way of looking at Society (and "Societies"), and often flips problems on their side to look at them from unexpected angles. Whenever an author can point out flaws in "Common General Thinking", and make others REALLY think about "What everyone takes for granted", we can all learn something from it... Good, Bad, Ugly, or Beautiful.

Mr. Williamson has gone that extra mile to point out "What everyone knows with so much surety that we never even think about it", is OFTEN very flawed! Of COURSE it's probably flawed if we're so sure about something that we never "Think it out for ourselves". We are NOT the Center of the Universe. Just because we know, and admit, that we're 'flawed', doesn't excuse us for not at least TRYING to become better.

There is no such thing as a "Perfect Society", "Utopian Society", etc, and anyone that claims to be building one is reaching for your wallet with one hand, and your freedom with the other. If a society is NOT "In Flux", then it's definitely NOT improving itself.

I like several of the lessons from this book greatly... No one has "The" answer, but if we consider possible answers from many sources, we can at least obtain a 'better' answer overall... we fail right off the bat if we pre-judge the SOURCE of a possible better answer without at least listening to what they have to say. I guess that's the wordy way of repeating an old simple saying: "Don't judge a book by it's cover"

"Capitalism" is NOT a dirty word. There are evil Capitalists, just like there are evil Religious Leaders; Just because a few evil people practice a concept, doesn't make the entire concept 'evil' (You may think the short way of explaining that concept is: "One bad Apple doesn't spoil the entire basket". But actually, 'One bad Apple DOES spoil the entire basket of Apples'... Luckily, 'People', 'Concepts', and 'Societies', aren't 'Apples' ;) )

Back in College, a favorite Western Civilization Professor used to tell me, "NEVER think we have the ultimate society, or that our Society is the best ever obtained. We DO NOT, and it IS NOT. Our 'Technology' may be MUCH higher than that obtained by societies in the past, but there have been several societies in the distant past that functioned much better than ours, overall."

FINALLY someone has brought those lessons to life, in a way where our face gets rubbed in the examples provided. You may not agree with all of the conclusions and concepts, but at least you start thinking about "Things we take for granted", and reflecting on WHY they are taken for granted, for yourself.

I have really enjoyed this series so far and look forward to reading the next book. Mr Williamson has a decisively devious mind and a wonderful grasp of the social and political ideologies he presents.

Love this book! Action, adventure, and political intrigue this has it all. Enjoyed it immensely.

A brilliant piece, comparing and contrasting a Liberterian society with ours. And a great story

Contact with chaos is incredible! The audiobook is brilliant!

How do you write a story of dealing with first contact with an alien culture? People have tried to do that for years with varying degrees of success.

What does it take to communicate with and collaborate with I completely different species with different kinds of intelligence, ethos, evolution,and even body chemistry? and then how to provide that to the reader?


In contact with chaos MZW Accomplishes that. More so, the audiobook is in my opinion the best way to enjoy the story. Stephen Bowlby Provides incredible and nuance to each character, especially the Ishkul characters.

When I tried reading parts of the book versus listening I got lost easily. With Steven’s narration I stayed embedded in the story and it was absolutely worth it.

Do yourself a favor, buy this book. You do not have to know anything about the freehold series to enjoy the story. But, more books can’t hurt.