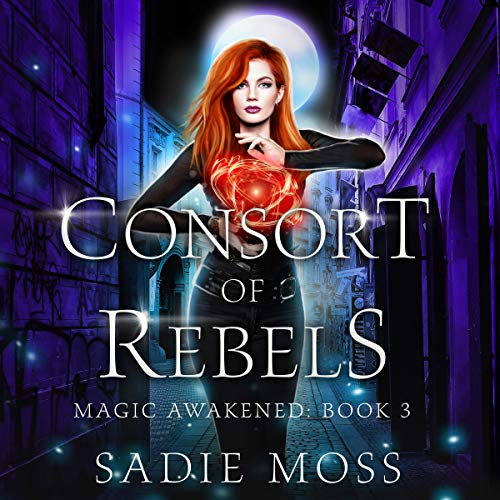 By: Sadie Moss
Narrated by: Heather Firth
Try for £0.00

She’s an unwilling icon of freedom, loved by four rebel warriors. And the fate of humanity rests on their shoulders.

The world I thought I knew was a lie.

Rocked by betrayal, injured, and imprisoned by an enemy I didn’t know I had, I’ll do whatever it takes to get back to my four.

Because there’s an all-out war brewing for the future of humanity, and without them at my side, I won’t stand a chance of winning the battle.

But when people start looking to me as an idol, my confidence falters. I’m prepared to fight and die for what I believe in, but can I be the leader they need?

Magic, romance, and action collide in the thrilling conclusion of the Magic Awakened series, a reverse harem urban fantasy featuring one badass ex-mercenary and the four sexy-as-sin men who will do anything to protect her.

What listeners say about Consort of Rebels

Exciting & enthralling, it gave me the chills!

This instalment was a thrilling rollercoaster ride, a feast for my imagination, that I couldn't put down. Heather Firth's narration was so expressive it gave the speech at the resistance headquarters 'presence' and gave me the chills! I loved it, I'm just disappointed I've finished!

Consort of Rebels by Sadie Moss is a reverse harem paranormal romance that I listened to on audio narrated by Heather Firth. This is the third and final book in the Magic Awakened Trilogy.

Sadie did an amazing job on wrapping up the series. I absolutely loved Lana, Akio, Fenris, Jae, and Corin. I cannot wait to dive into more of Sadie’s book in the future.

Heather did a great job on the narration. She really knows how to bring a story to life.

I would recommend this book if you like Paranormal/Fantasy Romance, Slow-Burn Romance, or Reverse Harems.

This was an amazing end to the series. Fast paced, lots of action, strong sexy characters, that have grown so much from the beginning. Heather's performance also just got better and better as the series continued.

I absolutely love the Crow and her four!! this was a brilliant action packed, heart wrenching finale to this wonderful series!!
Highly recommended!!
Brought superbly to life by the amazing narration by Heather Firth!!

Fun fantasy filled with all kinds of beings

This was a wonderful ending to the series filled with all kinds of magical characters, tons of action and a kicka*s heroine with four hunky, alpha males to help her ensure humanity survives.

Amazing narration by Heather Firth, love all her characterizations. She gets better and better every time I hear her.

Loved it, yet thought her four men would have been more a part of saving the world. So 4.5 stars for me.

This was the final book in this series. I liked how they had grown and that we learned more about the guys. Good steamy scenes! Lots of action that was frustrating because they never won but the ending was shocking but was a good finale. Narrator did great throughout.
#AudiobookObsessionReviewer

Amazing conclusion to this trilogy

Loved it. The conclusion of this trilogy did not disappoint. Starts out with Lana in a cell, and the threat of draining her magic happening soon. To find out Rain was behind all of the deaths and that of her grandmother, Lana has the information, if only she can escape and get it to the council. A lot of action, battles, and war, as well as deaths. A definate must read if you enjoyed the story so far.

This storyline is very exciting and enjoyable. Heather really does give these characters personalities. Heather keeps getting better and better with every book she narrates. Good strong characters.

Magic collides in this finale

Consort of Rebels, the last story in this action packed, reverse harem, urban fantasy in the Magic Awakened trilogy.
Lana our bad to the bone heroine and her four sexy very protective men never seem to get a break, and are willing to fight to there death to protect the people who have put there faith in them, in her who they want as there leader.
Heather Firth thank you for giving me this audible book for a fair and honest review, your narration was wonderful, you definitely brought these characters to life.

the story is interesting, but if you like real harem and hot steamy relationships, this is not your book
.pristine ,virginal "sex scenes,".

Consort of Rebels is the final book in the Magic Awakened trilogy. It starts where the second one ends. It has been a while since I listened to book two but I was able to jump right back in. Consort of Rebels was full of action and suspense with everything coming to a head in a a final epic battle where labels didn't matter. While there was some steam, there wasn't a lot. Mainly this book was focused on defeating the villain before ultimate power was achieved. Part of it reminded me of Mocking Jay. I also loved Ivy's role in this story. Overall Consort of Rebels was a great finale to this trilogy - full of action, magic-battles and Lana strengthening her bond with the guys.

I received this audiobook for free from Audiobook Obsession. This is my honest and voluntary review.

Great way to end this series!

I did a re-listen before listening to this third and final book in Sadie Moss’s Magic Awakened series and by doing that it made me love it all over again. I loved the storyline and how the characters grew and really opened up to each other. I loved finally getting to see Akio and Jae go that final step with Lana and it was hot and amazing and super emotional. I kinda wish we got that in the other books but I understand the story lended itself to this pace and made it more special I think. I thought the action scenes and emotional scenes were perfect and the epilogue was a big jump story wise but I couldn’t help smiling haha. I think some of the side characters really stood out in this one. They needed everyone to do their part to defeat the evil and keep the world safe. It was a really well thought out series and I am kinda sad its over for me haha. Until next time I binge-listen that is ❤️

For the narration, I have no complaints or critiques whatsoever. I thought Heather did a phenomenal job with the different character voices and intonations. I totally teared up when the big battle and pinnacle moment happened, I could feel the love and sadness and I know it would be ok in the end, but still I felt all that emotion in Heather’s tone. Amazing job, thank you for bringing these characters to life.

Phenomenal series, just be aware if you are listening its more of a slow/medium burn RH and it focuses a lot on the storyline and less about the romance (not a bad thing at all, I loved all the magic and creatures, and politics actually). 100% recommend.

I loved it! so much drama and action! I couldn't get enough of it! On top of that it had an extremely satisfying ending!

I really liked this series and this was a great ending. With trying to stop another magic steal it was interesting to see how the gifted population split after finding out about the great death. Great story and twists

Lana is still in the same situation from where she was when the last book ended. She refuses to give up or in and its reunited with her men. I love how their bonds continue to grow and the men continue to reveal more of themselves to Lana and allow themselves to be more vulnerable. There have been some drastic changes in a short time and Lana has become the crow for the rebellions. She struggles with people using her as a symbol for their rebellions and figure out how to keep those she loves safe. This was a good ending and I loved the epilogue for Lana and her men. I would love more stories in this world and getting to see how things continue.

Everything she writes mange’s you pull me an take me on a journey far from my boring life. I’ve really enjoyed this series and can’t wait for the next one on audio. Heather Firth does such a great job with the narration on these she keeps me coming back to listen. #AudiobookObsession

This is the final installment in this series and it didn’t let me down. This is a little bitter sweet for me. I don’t want to let these characters go. What a way to go out though. . . Throughly enjoyed this book and the whole series.

This book was an amazing conclusion to the series. There was action, drama, and a few surprises that really pulled you in and kept the story flowing. Sadie Moss and Heather Firth did an amazing job with the story and the telling. This is a series you should definitely read or listen too.

I absolutely love stories by Sadie Moss. This one was wonderful and I really enjoyed the characters. The narrator did an excellent job telling the story. I look forward to more from Sadie!!
#audiobookobsessionreviewer