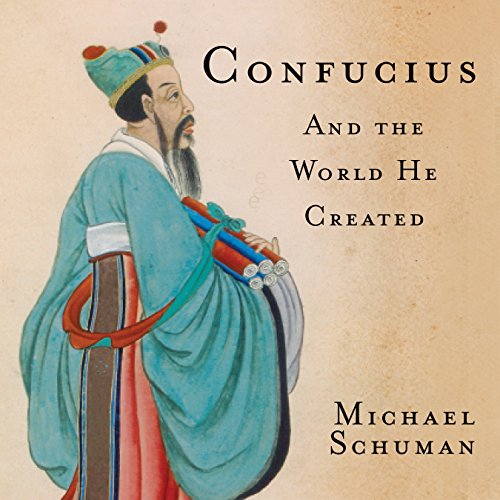 And the World He Created
By: Michael Schuman
Narrated by: Steven Menache
Length: 12 hrs and 47 mins
Categories: Biographies & Memoirs, Religious Figures
4.5 out of 5 stars 4.3 (3 ratings)

Confucius is perhaps the most important philosopher in history. Today his teachings shape the daily lives of more than 1.6 billion people. Throughout East Asia, Confucius' influence can be seen in everything from business practices and family relationships to educational standards and government policies. Even as Western ideas from Christianity to Communism have bombarded the region, Confucius' doctrine has endured as the foundation of East Asian culture. It is impossible to understand East Asia, journalist Michael Schuman demonstrates, without first engaging with Confucius and his vast legacy.

Confucius created a worldview that is in many respects distinct from and in conflict with Western culture. As Schuman shows, the way that East Asian companies are managed, how family members interact with each other, and how governments see their roles in society all differ from the norm in the West due to Confucius' lasting impact. Confucius has been credited with giving East Asia an advantage in today's world by instilling its people with a devotion to learning and propelling the region's economic progress. Still, the sage has also been highly controversial.

For the past 100 years, East Asians have questioned if the region can become truly modern while Confucius remains so entrenched in society. He has been criticized for causing the inequality of women, promoting authoritarian regimes, and suppressing human rights. Despite these debates East Asians today are turning to Confucius to help them solve the ills of modern life more than they have in a century. As a wealthy and increasingly powerful Asia rises on the world stage, Confucius, too, will command a more prominent place in global culture.

Touching on philosophy, history, and current affairs, Confucius tells the vivid, dramatic story of the enigmatic philosopher whose ideas remain at the heart of East Asian civilization.

Very good reader, and that’s half the job

Very good reader, and that’s half the job done, also many of the descriptions I found particularly funny or interesting have been confirmed by Chinese friends so a good supplement to understanding cultures influenced by Confucianism

all you need to know about the Chinese

I think this is a definitive audio book on how and why the Chinese are the way they are. well written and equally well read.

A great look at a historic figure

This book did a fantastic job of introducing the listener to the greater historic sage is a way the worked for even people who only knew his name but never the philosophy behind it.

a great summary and current-day assessment

a great summary and current-day assessment of Confucianism in its various morphs, up to today