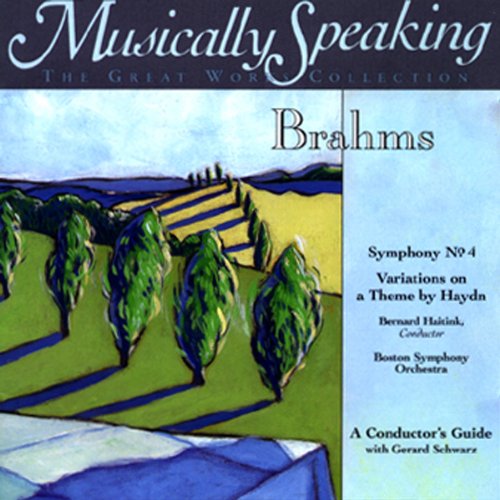 Conductor's Guide to Brahms' Symphony No. 4 & Variations on a Theme by Haydn

The more adventurous composers of the 19th century, such as Liszt, Chopin, and Berlioz, made use of the Classical forms and procedures, though often modifying them for their own purposes. And certain composers remained dedicated to the Classical heritage. None was more devoted to this than Johannes Brahms. Although Brahms was drawn to certain aspects of Romanticism, he developed a profound affinity to the musical thought of the great Austro-German composers of the preceding century: Bach, Haydn, Mozart, and Beethoven. In an era when his colleagues were exploring new modes of musical design, Brahms showed that sonata-form, fugue, and theme-with-variations still held great potential.

The Musically Speaking Conductor's Guides are your link to an appreciation of the greatest classical music ever performed. Let Maestro Gerard Schwarz enrich your classical music listening enjoyment by illuminating the great works of the Masters with revealing commentary and educational insight.

What listeners say about Conductor's Guide to Brahms' Symphony No. 4 & Variations on a Theme by Haydn