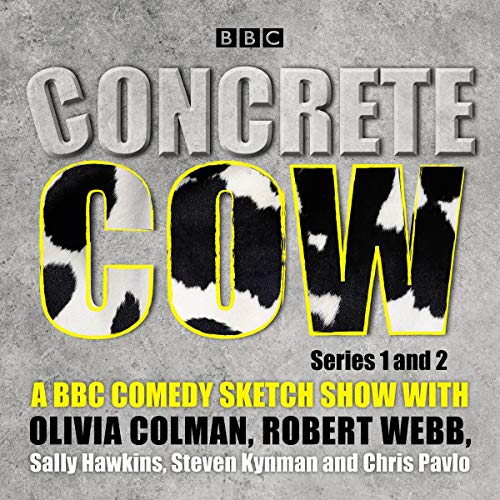 All 12 episodes of the BBC Radio 4 sketch show starring Robert Webb and friends.

Welcome to Concrete Cow, the sketch show where anything is possible. Written by James Cary, who won a Silver Sony Award for Think the Unthinkable, this silly, surreal and ingenious comedy stars one half of ‘Mitchell and Webb’, Robert Webb. Also featuring are Oscar-winning actress and comedian Olivia Colman, as well as Sally Hawkins, Chris Pavlo, Beth Chalmers and more.

Highlights include Narnia being vandalised by two kids from Peckham, temping for NASA, Batman’s schedule, the theft of Hitler’s jewels, and the consequences of a murder mystery party that goes a little too far. Plus, King Midas is not sure whether life is as good as gold, Sherlock Holmes plays Cluedo, Alan Turing needs IT support and a war poet is told that the troops prefer limericks.

We also learn the real reason Columbus sailed round the world, discover the truth behind laser eye surgery, and get a taste of Radio 4’s new quiz show, I Think You’ll Find, consisting of ‘half an hour of excessive pedantry and nit-picking (first round: split infinitives)’.

What listeners say about Concrete Cow