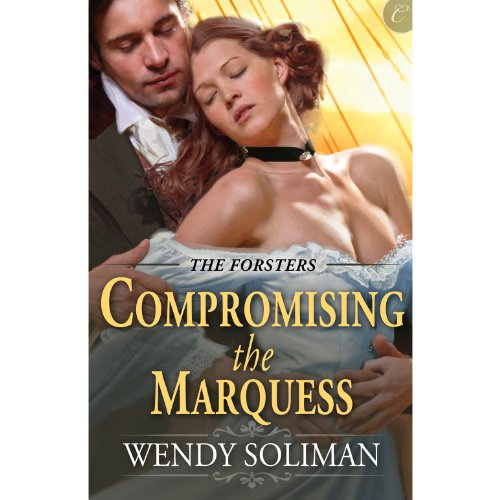 By: Wendy Soliman
Narrated by: Lauren Irwin
Try for £0.00

Leah Elliot sells secrets to survive. Donning boy's clothes, she uncovers society scandals for a London gossip rag to support herself and her sister, who were left destitute after their father's death. When she meets the dashing - and perhaps dangerous - Hal Forster, the Marquess of Denby, she learns he may be involved in treason. The rumor is too valuable not to sell, despite her attraction to him.

Hal does have a secret, but he's no traitor: he's a spy embroiled in a mystery, seeking the man who killed his contact in France. He sees the alluring woman behind Leah's disguise at once but is intrigued enough to play along - until he realizes that she's the source of the rumors interfering with his investigation and forcing him into an unwanted betrothal.

Now, Hal and Leah must work together to draw out the culprit and undo the damage caused by Leah's gossip. Or will their passion only cause more scandal?

What listeners say about Compromising the Marquess

The story was somewhat interesting. Well, at least the blurb made it sound interesting. It was very difficult to know because the "performance" wasn't one, and the woman who read the story didn't do it well. The British accent on most words was okay, but others were just not right ( in either British or American). It sounded like she had never been exposed to some of the words at all. As for French words in common use in that era? Modiste is not pronounced like modest, the final consonant not followed by an E is not pronounced (for instance, "on dit" is pronounced "on dee") and the final E in a French word is not given a long A pronunciation. Oh, but one mispronunciation had me laughing out loud; there's wanton and wonton. The former, in most romances, means (sexually) unrestrained, while the latter is a Chinese soup. They are spelled and pronounced differently, and I don't care if the print version she was reading had wonton, she should have gotten it right just by the context. The story was less than fair, but better than outright horrible. I did like the heroine enough that I wouldn't slap her, but not enough to stop and chat. Neither the heroine nor the hero was fleshed out - I'm talking character, not body, but that wasn't described well enough for me, nor were secondary characters. We do know that Leah has red hair and freckles and thinks she's ugly, and that she thinks Hal looks like a Viking. There were a couple of things I did like about the book. One of the mysteries had a surprise ending, and the author used some references to Fanny Hill to parallel the sexual growth between the heroine and her hero. The editing of both the story(it was too long and somewhat confusing) and the audio could have been massively improved. Production values were okay. Don't bother with this unless it is free and you have a few hours to kill.

Where does Compromising the Marquess rank among all the audiobooks you’ve listened to so far?

The narrator's voice was good for the female parts...not so much for the male. She mispronounced many words (not because of the differences between British and American English). These issues were distracting.

The story was dull I couldnt even finish it the narrator voice was grating if could give no stars i would.

I can't believe this was given a positive rating!!

The narrator, Lauren Irving, should be given lessons in pronouncing words over 2 syllables. She misread seemingly every important word in both English and French. This disability made the listening both excruciating and frustrating. I was continually required to translate to the appropriate word which made the book laborious listening. I am shocked to note that this book had both a producer and an assistant producer. Obviously nobody edited this performance. I am furious that I wasted my time and money in purchasing this book

The ending was predictable and reasonable.

The narrator should NEVER read another book. Or she should go to school and learn basic pronunciation and syntax so that the story is given its proper due.

What character would you cut from Compromising the Marquess?

I would be furious if I were Wendy Soliman. The narration was a detractor instead of an enhancer of the plot. I never fully realized before how much the narrator adds to ( or detracts from) the book.