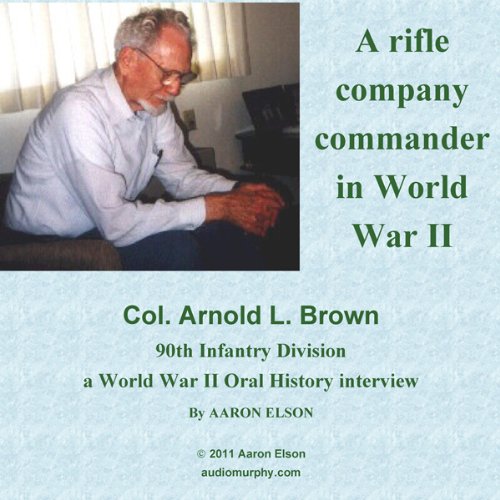 "After the battle, we picked up a German soldier who had been wounded. He had been shot in the leg with a .50-caliber bullet, and had lain out overnight in this freezing, subzero weather. Both of his arms and both of his legs were frozen stiff as a board. He begged us to shoot him. I couldn't do it. I asked for a volunteer. But these battle hardened soldiers would not volunteer. One soldier lit a cigarette and held it to his lips. Another soldier brought him a hot cup of coffee and held it so he could get coffee until we got the litter jeep up there and sent him to the rear..."

Arnold Brown enlisted in the Army in 1936, with only an eighth-grade education. By 1944 he was a captain in the 90th Infantry Division, commanding a rifle company for 10 months in combat.

The stories are fantastic. The book is far too short, and sounds like it was recorded with a hand-held micro cassette recorder, placed 20' from the subject. The sound quality is bad. Really awful. Unintelligible in parts.

That said, I strongly prefer hearing these stories from the vets themselves rather than an actor reading lines.

I would buy dozens more books like this, poor sound quality and all.