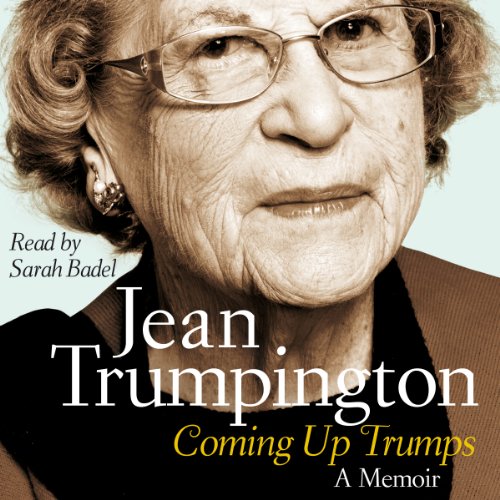 Coming Up Trumps: A Memoir

By: Jean Trumpington
Narrated by: Sarah Badel
Try for £0.00

A riveting memoir from Lady Trumpington, doyenne of the House of Lords, taking her from 1920s London to the beginning of her political career in the early 1960s. In this witty, candid and utterly fascinating memoir, Baroness Trumpington looks back on her long and remarkable life.

The daughter of an officer in the Bengal Lancers and an American heiress, she was born in 1922 into a world of privilege and luxury. But her mother lost most of her inheritance in the Wall Street Crash and the family retrenched from Mayfair to Sandwich, in Kent, where her mother became a succesful society interior decorator.

Leaving school at 15, without ever taking an exam, the young Jean Campbell-Harris was sent to Paris to study art and both French and German, but two years later, with the outbreak of the Second World War, she became a land girl - on a farm owned by Lloyd George, a family friend. She loathed the outdoor life and soon changed direction, putting her German to good use by joining naval intelligence at Bletchley Park, where she stayed for the rest of the war.

After the war was over, she went to New York and worked on Madison Avenue as an advertising copywriter. It was in New York that she met her husband, William Barker, a history teacher. They returned to England and married in 1954, where Barker became first a master and then headmaster at the Leys School in Cambridge.

In this witty and winning memoir, Jean Trumpington recalls her early life, growing up in London and Kent in the 1920s and 30s, her wartime experiences, her life in the world of Madison Avenue's 'mad men' and - perhaps the happiest period of her life - her years as a headmaster's wife. The book ends with her embarking on what was to become a distinguished political career. It is vivid, forthright, and funny, and will appeal to readers who enjoyed the Duchess of Devonshire's Wait for Me as well as to the many people who warmed to Lady Trumpington after her triumphant appearance on Have I Got News for You.

"As I read the book I kept thinking of Miranda Hart. But in the end it is not the wonderful comedy I remember but her determination to keep going, even when in her eighties her Battersea flat burnt down. “I always tried my very hardest because I felt so lucky,” she explains, but the Baroness made her own luck." (Saturday Review, The Times)
"What a joy this book is. Trumpers is irrepressibly naughty, permanently mischievous and hasn’t finished yet…But this memoir isn’t just a fascinating, frequently hilarious insight into the life of a force of nature. It is also, despite itself, an examination of a particular generation of women, trained for not much except marriage and cocktail parties, and of how, given the right spirit, some of these women derailed in the best possible way and went on to have wonderful adventures." ( Sunday Times, Culture, India Knight)
"This is the stuff of Evelyn Waugh and F Scott Fitzgerald except that Lady Trumpington lived it for real and to the full….However for all the giddy lurching from poverty to wealth, swanky parties to lonely digs there emerges a poignantly touching tale of a fiercely intelligent woman searching for her place in the world. That she finally finds it is a source of delight…A book never had a better title." ( Daily Express, Caroline Jowett)
"..exuberant, engaging and very funny book" (John Preston, Daily Mail)
"Coming Up Trumps is an absolute riot, a brisk trot through the life of a feisty, fun-loving aristocrat who knew anyone who was anyone in the last century…a colourful life and her equally colourful, life affirming, gloriously funny autobiography." ( The Sunday Express Charlotte Heathcote)
"…and now, in her 92nd year, publishing her memoirs, which are as welcome as they are overdue…there is something exhilaratingly sane about a stream of off-the-cuff anecdotes and reminiscences at the end of a long life. Shut your eyes – this is one of the acid tests of a good memoir – and you can almost hear the baroness in full flow, holding forth over a whisky in a bar the House of Lords…Trumpington is a splendidly self-depracating raconteur, with some funny stories to share." ( Sunday Telegraph David Robson)
"Characteristically trenchant and witty, the indomitable Baroness Trumpington’s view of her long well-lived life is a joy to read." ( Choice Magazine)

What listeners say about Coming Up Trumps: A Memoir

Would you try another book written by Jean Trumpington or narrated by Sarah Badel?

If there were more details in the book, then probably yes. Well read though.

She has done far too much to squeeze into one autobiography and as a result everything is skimmed over far too briefly to make it interesting or engaging. She is v honest about her life and what she has experienced but I gave up as it was a mad rush over the surface. V frustrating.

Fascinating insight to a remarkable life. Not many like this Baroness around these days! Clear reading. Very glad I purchased this book.

I loved theses memoirs of a woman who has had an incredible journey through life, and had the courage to take the unconventional turns in life. Very enjoyable written with good humour and narrated brilliantly by Saral Basel.

What made the experience of listening to Coming Up Trumps: A Memoir the most enjoyable?

What other book might you compare Coming Up Trumps: A Memoir to, and why?

The David Niven books and the Dirk Bogarde books - entirely different life styles but a similarly dry and self deprecating sense of humour shared by all three characters.

What does Sarah Badel bring to the story that you wouldn’t experience if you had only read the book?

She IS Baroness Trumpington in the way that she reads it.

No, it was rather one to be savoured and even reread.

Persevere and you'll be rewarded...

At first I thought I'd struggle to tolerate this narration - it was like being stuck next to a stranger, maybe on a long flight, who goes on...and on...and on about themselves...dropping name after name. Then I realised how fascinating Baroness Trumpington's life has been, and the narrator's delivery suits the spirit of the age in which she grew up. But I wonder whether this time the written page would be better.

Wonderfully effervescent if deliberately superficial at times. There is a great feeling that there could have been a lot more in terms of scurrilous gossip, but Lady T is carefully discreet about others whilst being starchily honest about herself. She's led an amazing life and her zest and enthusiasm is wonderful. Really recommended. Superb narration is the icing on the cake and injects fantastic colour and feeling to the Baroness's words.

If you could sum up Coming Up Trumps: A Memoir in three words, what would they be?

What other book might you compare Coming Up Trumps: A Memoir to, and why?

does not compare to anything i have read yet absolutely brilliant

What does Sarah Badel bring to the story that you wouldn’t experience if you had only read the book?

she tells the story in a most inspiring way

I enjoyed this so much, such spirit and fun, she makes me want to find her zest for life and living myself, I hope she’s still sticking two fingers up at the world, wherever she is

for the older listener i think

struggled to finish this but i think it would be great for the older listener. I have recommended this to Aunts etc.

A long life of privilege and good fortune, all recorded by a ghost writer at a breathtaking pace. The faux self effacing tone didn't fool me for a second and betrays itself over and again anyway. Homeless for a night prior to your society wedding were you Jean? Don't think so love. Her pleas of impecunity become wearing too.

Such a pity - this lady has lived through seismic events in our nation, many of which she witnessed first hand, due in part to the well-connected contacts that her background has afforded her. There is however, so little detail given that one gets no sense of this. "First I did this, and then I did that; now, moving on...". It is in the detail that is the fascination lies.

Unusually, this is an audio book to which I won't give a second listen. The reading by Sarah Badel is very good though.

A delight to listen to

I found this book a delight to listen to. Sort of reminded me of the stories my British grandmother us to tell. Jean Trumpington is in her nineties and tells the story of her long and remarkable life. She was daughter of an officer in the Bengal Lancers and an American heiress. Jean Campbell-Harris was born into a world of privilege, but the Wall Street crash of 1929 entirely wiped out her mother’s fortune. Leaving boarding school at fifteen she was sent to Paris to study French and German. At the outbreak of WWII she returned to England and became a land girl on the farm of Lloyd George. She then joined naval intelligence at Bletchley Park where she stays until the end of the war. After the War she lived in Paris with the family of the England’s Ambassador to France. She then went to New York City to work on Madison Avenue. She met many of the prominent families of U.S. wealth and politics. While in the U.S. she met her future husband British historian Alan Barker. The married in 1954 and had a son Alan, she lived the life of a headmaster’s wife before embarking on a distinguished political career, as Cambridge city councilor, mayor of Cambridge, and served in two conservative governments first as Parliamentary under-secretary of State in department of Health and Social Security and second as Minister of State in the Ministry of Agriculture, Fisheries and Food. In the 1980’s she was made a life peer and becoming Baroness Trumpington of Sandwich. She still serves in the House of Lords. Baroness Trumpington is forthright, witty and opinionated. The stories read as the who’s who of the era. The book is a wonderfully readable account of a well lived interesting life. Sarah Badel did a marvelously job narrating the book.