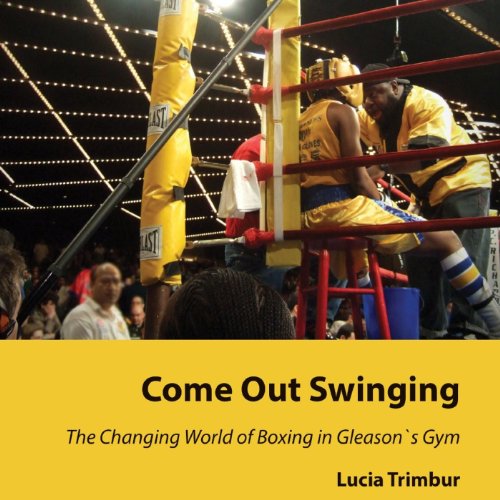 By: Lucia Trimbur
Narrated by: Anne Brendle
Try for £0.00

Gleason's Gym is the last remaining institution of New York's Golden Age of boxing. Jake LaMotta, Muhammad Ali, Hector Camacho, Mike Tyson - the alumni of Gleason's are a roster of boxing greats. Founded in the Bronx in 1937, Gleason's moved in the mid-1980s to what has since become one of New York's wealthiest residential areas - Brooklyn's DUMBO. Gleason's has also transformed, opening its doors to new members, particularly women and white-collar men. Come Out Swinging is Lucia Trimbur's nuanced insider's account of a place that was once the domain of poor and working-class men of color but is now shared by rich and poor, male and female, black and white, and young and old.

Come Out Swinging chronicles the everyday world of the gym. Its diverse members train, fight, talk, and socialize together. We meet amateurs for whom boxing is a full-time, unpaid job. We get to know the trainers who act as their father figures and mentors. We are introduced to women who empower themselves physically and mentally. And we encounter the male urban professionals who pay handsomely to learn to box, and to access a form of masculinity missing from their office-bound lives. Ultimately, Come Out Swinging reveals how Gleason's meets the needs of a variety of people who, despite their differences, are connected through discipline and sport.

What listeners say about Come Out Swinging

Unbelievably bad.
Political correctness gone mad.
Judgemental, patronising and pretentious all at the same time.
Delivered in a monotonous fashion.
Do not waste your money or time.