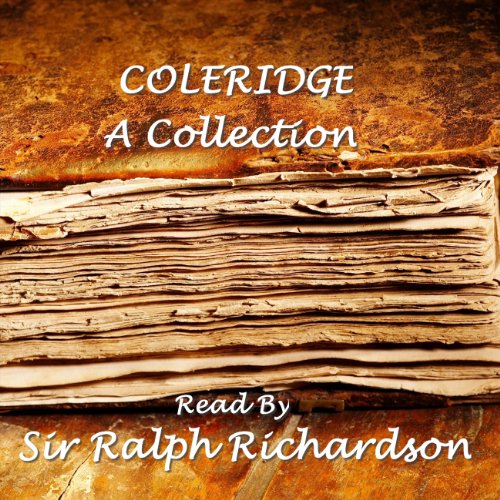 By: Samuel Taylor Coleridge
Narrated by: Ralph Richardson
Try for £0.00

England has produced many wonderful poets. Samuel Taylor Coleridge, one of the "Lake Poets", is safe amongst their number. As well as a poet, he was also known for his skills as a critic and philosopher. With his great friend William Wordsworth, they began what is now seen as the Romantic Movement. Contributing such great works as 'Rime Of The Ancient Mariner', 'Kubla Kahn' and his opus Biographia Literatia to the English language ensures his place in our history.

However there was a darker side to Coleridge, including his dependency on opium. At the time, it was not illegal but its effect on him were harrowing. Who knows what might have been?

This collection is read by Sir Ralph Richardson - also safe in the pantheon of English acting.

What listeners say about Coleridge

As in his Blake collection, Ralph Richardson illuminates Coleridge's masterpieces with warmth, intelligence and humanity. His "Ancient Mariner" is a towering alternative to the famous and better known version by Richard Burton, but his "Kubla Khan" is a stand alone masterpiece. Thoughtful, considered and extraordinarily skilful, this is poetry reading of a kind which has vanished from the contemporary world. Truly splendid.

Ralph Richardson's voice was well suited to this compilation and he gave an excellent reading but his performance was marred by the arrangement of the material.

Unfortunately, the major poem in the collection, 'The Ancient Mariner', was broken up as Chapters 2, 4, 6 & 8 while the odd in-between chapters 3, 5, & 7 contain quite different poems. Furthermore, there are verses missing from 'The Ancient Mariner' at the start of Chapters 4 & 6. These would all seem to be editing errors and the recording should NOT have been marketed in this condition.