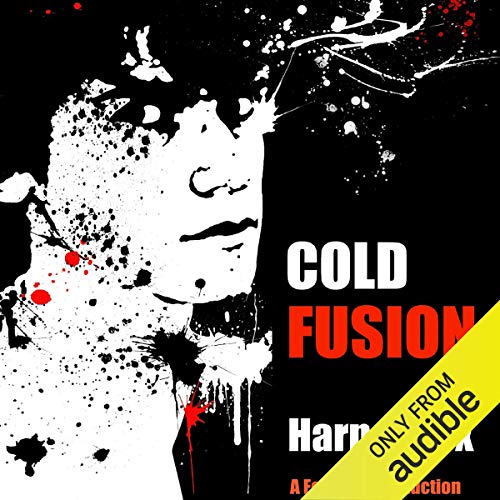 By: Harper Fox
Narrated by: Miles London
Try for £0.00

This is a FoxTales edition of the book Cold Fusion, previously published by Samhain Publishing. Other than the cover, this edition is the same as the previous version.

Mallory is on the run from his whole life. He's been working for an environmental activism group, but he's out of control, trying to wipe out the memories of a tough childhood in his efforts to save the planet. When an accident at sea costs the lives of his colleagues, he crash-lands back in his hometown in the far north of Scotland, lonely and at rock bottom.

It's the last place on earth he expects to find comfort or friendship. But a strange young man is hard at work in the abandoned craft village where Mallory used to take refuge. He's compellingly gorgeous. It takes Mallory a while to get him talking, and when he does, he thinks his new friend is delusional. Vivian believes he's mastered the technique of cold fusion in his makeshift lab: a semimythical source of free energy which could change the world.

To Mallory's astonishment, Vivian convinces him. And others have been convinced too - malevolent powers who wouldn't think twice about killing Viv to get at his discovery. He's brilliant but completely unworldly. All Mal can do to protect him is take him on the run.

They're a wildly mismatched pair. Thrown together in the teeth of danger, they bond despite their differences. Soon Mal knows there's nothing he wouldn't do to save Viv, and attraction springs up between them like fire. But Mal is up against an enemy within, and Viv's time is running out....

What listeners say about Cold Fusion

I love Harper Fox' ability to write great romances and she is again a poet in describing emotion and nature. But this novel is so far from believable I could not enjoy it.

I've really enjoyed some of Harper Fox's novels - Scrap Metal had a great story and the narration was super. Seven Summer nights, brothers of the wild north sea and even the Salisbury key were all very enjoyable if a little clumsier in style.
This book however fails on all fronts- the narration doesn't fit the characters which in itself is irritating, but the writing is so clumsy, the plot development and characters so derivative and unrealistic it was hard to listen to and I gave up...
Seems a shame!

Another amazing book by Harper Fox

Would you listen to Cold Fusion again? Why?
I WILL listen again. There is something about HP's books that makes me feel it down to my toes and Miles London nailed it!

Who was your favorite character and why?
Vivian! He's awkward and distant at first, then after about 2 minutes, he becomes someone who needs to be loved and protected from everybody else.
I want to hug him and tell him it will all work out.
Mallory on the other hand.... but eh, I love him too in the end.

Have you listened to any of Miles London’s other performances before? How does this one compare?
Sadly, no. This is his first audiobook as far as I know (?). But I will be keeping my eyes peeled for any upcoming books he narrates. Two thumbs up.

If you could rename Cold Fusion, what would you call it?
Cold Fusion fits it perfectly

Any additional comments?
Just that I love Harper fox as well as the narrators for her books. I could listen to them again and again.. and generally do.

ive never been disappointed with any of Harper's books, but this one really struck a heartfelt appeal that was unexpected. and as usual, superb narration

another adventure in love and the magic of life

Only the best writing, a love that burns like fire, and the threat of a tidal wave snuffing it out too soon. There is action, mystery, lust, love, heartbreak, a heroine, and a sprinkle of magic in this fantastical story. The narration is lovely, the plot engrossing, and don't be afraid of the heart breaking moments, because Fox won't fail you. As good as the rest, if you enjoy any of Harper's other reads, you need this one too!