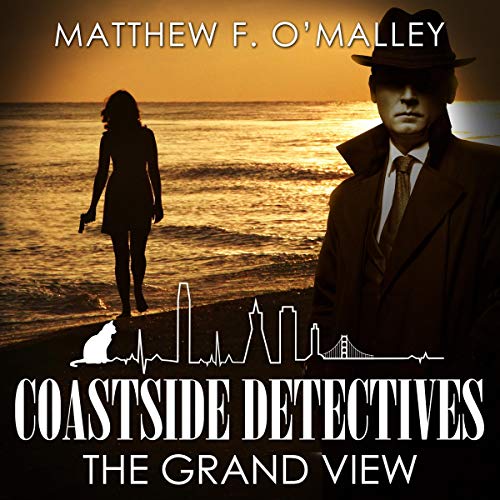 The views of San Francisco, so well known from dozens of film noir tales and classic novels, are the backdrop to a tale rooted in the smart-bombed skyline of present-day Baghdad, with results in San Francisco just as deadly.

Detective Mike Mason now lives in Pacifica, a small coastal town just south of San Francisco, but is drawn back to the rough streets of the city's Tenderloin District by a new client named Laura Grandviewer, who is as beautiful as she is untrustworthy. Lies and half-truths send Mike upon a crooked path, and before he can unsnarl all of the loose ends, Laura has set waving in the criminal winds, a growing body count will work to unnerve this hardened detective and end in a climactic splash of blood.

The latest in a long line of West Coast private eyes, Mike Mason takes stock of the state of his soul, as he navigates the complexities of a criminal caper and finds clarity for both in the fog-scrubbed sky viewed from California's winding Highway One.

Matthew O'Malley is also the author of multiple award-winning short stories found within his Tales for Sale series. This is the first audiobook in the Coastside Detectives series.

How hard was it to sit and take photos?

Joe Ballard ran the private detective agency started by his father. Now, semi retired, he'd made Mike Mason, his long time employee and now friend, his business partner who ran the Pacific branch and had renamed the office Coastside. The area was wealthy, unlike the Tenderloin area where he'd first worked, and Mike bought a house there not too far from Joe's.

A mysterious phone call took Mike to an address in the Shard, a building towering high with stunning views over Russia Hill and San Crancisco. Laura Grandviewer wanted him to find a man for her and photograph him over the next few days. They had been engaged to marry, Laura told Mike, but he'd left her without explanation. The odd thing about the assignment was she either did not want to, or could not, tell him the man's surname. It seemed suspicious but she was willing to pay, was very beautiful and something about her appealed to Mike. He started the investigation. What follows is a fast action, intense mystery thriller full of interesting twists.

A modernesque noir detective adventure, with diverse characters and a serious plot, this book is a great immersive read. The characters, even the main ones, are not especially pleasant people but they feel very real as they go about their daily tasks, trying to unravel the leads as they find them. The reader really feels aware of the neighbourhood and the people within it. Narrator David Angelo, gives a good performance as the cynical detective, unsure whether it is the quiet beauty of his relatively new home that he prefers or the noise and danger of the city. Every character is given their own distinctive voice and the intensity of the story line is reflected in the reading.

My thanks to the rights holder of Coastside Detectives: the Grand View, who, at my request via Audiobook Boom, freely gifted me with a complimentary copy. It was a most enjoyable listen and I hope there will be many more to come in this series.. Recommended.

The back ground was given from days of when they started in the Tenderloin District. To a new client that draws Mike back there, Laura is beautiful untrustworthy and lies, sending Mike to taking crooked paths, and murdered bodies.
Noir type story, with a good description of Mike for a PI. I liked the narrator, David Angelo,his voice was relaxed and fitted into the story and brought it to life. Given ARC audible for my voluntary review and my honest opinion

*The story was fun with twists and turns. It was not predictable.
*There were many surprises.
*The story reminded me of the old time detective stories I enjoyed (clean).
*The narrator brought the analytical, don't mess with me detective alive.

I was given a copy of this audiobook from the narrator at my request.

I wish this story was a series. I really loved the main characters and its nod to film noir.

Detective Mike Mason is Phillip Marlowe light but I enjoyed him. A lot of the story took place inside Mike's head, a la Marlowe, and the narrator does a decent job with the cadence. There is a dame with questionable ethics, a hardened old-timer, an over-worked police force and lots, and lots of mystery.

It really is too bad this story is not a series...

Everybody lies. Especially the client. Joe takes the call but Mike takes the case using a part time nerd employee and a street girl for surveillance help. There's an art dealer who seems suspicious, an "importer" who has a somewhat derelict plane plus a boat as well as some interested law enforcement. Things get really busy after the first murder! Loved it!
Narrator David Angelo has the perfect delivery for this book!
I won this audiobook in a giveaway! :)

I received this for book for free in exchange for an honest review.

I wanted to like this book, but I found myself disinterested in the characters. They felt very flat to me. If hard boiled detective stories are your favourite thing, that's the only reason to listen. Otherwise, I'd say pass.