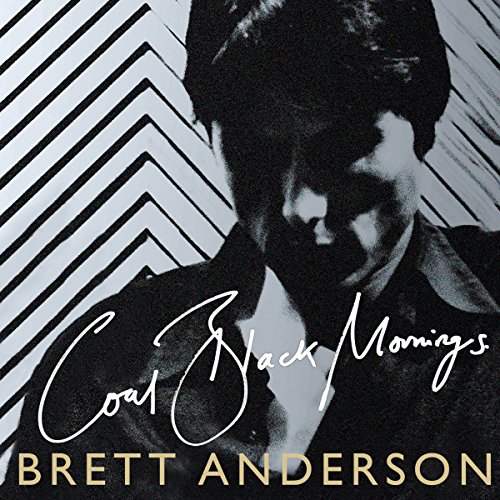 Listen to the end for an audiobook exclusive: Brett Anderson in conversation with Matt Thorne, author of Prince.

Brett Anderson came from a world impossibly distant from rock star success, and in Coal Black Mornings he traces the journey that took him from a childhood as 'a snotty, sniffy, slightly maudlin sort of boy raised on Salad Cream and milky tea and cheap meat' to becoming founder and lead singer of Suede.

Anderson grew up in Hayward's Heath on the grubby fringes of the Home Counties. As a teenager he clashed with his eccentric taxi-driving father (who would parade around their council house dressed as Lawrence of Arabia, air-conducting his favourite composers) and adored his beautiful, artistic mother. He brilliantly evokes the seventies, the suffocating discomfort of a very English kind of poverty and the burning need for escape that it breeds. Anderson charts the shabby romance of creativity as he travelled the tube in search of inspiration, fuelled by Marmite and nicotine, and Suede's rise from rehearsals in bedrooms, squats and pubs. And he catalogues the intense relationships that make and break bands as well as the devastating loss of his mother.

Coal Black Mornings is profoundly moving, funny and intense - a book which stands alongside the most emotionally truthful of personal stories.

A memoir of Brett Anderson

I intended to listen, by way of delayed gratification, chapter by chapter in installments. But like a packet of opened biscuits, I guiltily consumed Coal Black Mornings in one sitting. This is a memoir in which the author paints a picture of his bleak, poverty stricken upbringing with the juxtaposition of the colourful family characters that would later bring the lyrics of his song to life. It's a story of the influence of father to son and then on to Brett's own son. The moment you look in the mirror and see and acknowledge you are a reflection of your parents.

I tried to pace myself but couldn't. Brett's descriptive prose is difficult to tear yourself away from and I wanted more.

In terms of story it's an account of childhood, youth and band formation. But it's Brett's worldview that really captivates. The way he crystallises a certain time in a certain place that seems familiar in many ways and yet in others markedly distinct from my own youth.

An excellent memoir capturing the early years of Anderson and the band before they take off. It’s beautifully written, funny and moving. My criticism is that it was a little bit short

With the honesty and humility to intrigue at every corner. Thank you Brett. The end

The first thing to say about this book is that it's good and no, you don't need to be a fan of Suede to enjoy it. I actually enjoyed the first two thirds of the book, where Brett describes his upbringing, his parents and family, and the circumstances he grew up in, more than the last part, that charts the beginnings of Suede, just before they hit the limelight. Brett is a good writer, and a very good narrator. They're aren't many laughs in this book, but it isn't po-faced, it's just honest and it's hard not to smile when he describes circumstances you recognise. I look forward to the second book.

Really enjoyed this book. An honest account of Bretts family upbringing and rise to success. Genuine, humble and honest.

As a suede fan and a really vivid memory of where I first heard animal nitrate as a lost school kid I find it strange that I've only just found this book.

I loved it, I really want to know about the characters, the real people behind my "heros" that I grew up "knowing". There are noteable gaps as I got the impression they were all tea drinking smokers but I believe that was a much darker side that I don't think the book explored.....maybe for good reason. this fills that gap but has me craving for more.......get on and do the next installment Brett 👍🤗

a great idea to document for his son as well, you never quite know what is going to happen around the corner so now his family can know the story thorough Brett's eyes boys not through the drivel found on the internet. great work Brett ❤️

Beautiful and honest. Not just for suede fans

This is a brilliantly honest memoir of childhood, growing up as an outsider, and the early years of Suede. Written in Brett's beautifully descriptive style, that fans will recognise from his lyrics.

The Black Coal Mornings consciously ends at the point that Suede sign their record deal with Nude, so the highs and dark lows of success are not the focus of this book. A brave decision, that gives this book a distinct character, and allows the narrative to breath.

The audio book is the definitive version, as it is given extra life through Brett's narration.

I absolutely loved it.

I felt very engaged with Coal Black Mornings and since finishing it, my mind has kept returning to the themes that Brett describes including, family tensions and the work that goes into being creative. The book connects because the stories from life as an estate kid / outsider are not sanitised and the people in his life are beautifully observed through small but evocative details. Brett is also self deprecating and there are some very funny moments (Such as the school discovering a comic book / teacher hit list that he and a friend had put together.). The narration is spot on - clear and conversational with a great Q&A section with Matt Thorne at the end.

Being a massive fan of the Suede music catalog, I had no insight about Brett Anderson's childhood and formative years before the band really took off. I ended up purchasing the Kindle edition and the audiobook so that I absorb as much as possible. This audiobook provided that history and more, as Anderson dives into those years in a uniquely cerebral way. His style reminds me of prose in parts, which is entirely different than any other autobiography that I've come across before. I was able to immerse myself due to Anderson's ability to convey his thought in a descriptive way. I appreciated learning about his family and the experiences that he's been through. The early bits about the band and his friendship with Bernard Butler were the just the icing on the cake for what was a thoroughly engrossing read/listen.

An incredible story of passion and overcoming.

Brett's story is truly inspiring. What a class act and a pioneer. His prose are quality.

A very well written book, as a Suede fan I enjoy it very much, for anyone interested in Brett' s days before Suede and in the very begginin of the band it' s a must read.

Any Suede fan will love

The reading by Brett is great. A very entertaining, well written story that any fan of the band will love.

Must listen NOT read

Having Brett Anderson read this to you is soooo much better than reading the books (and I own both hardcovers!).