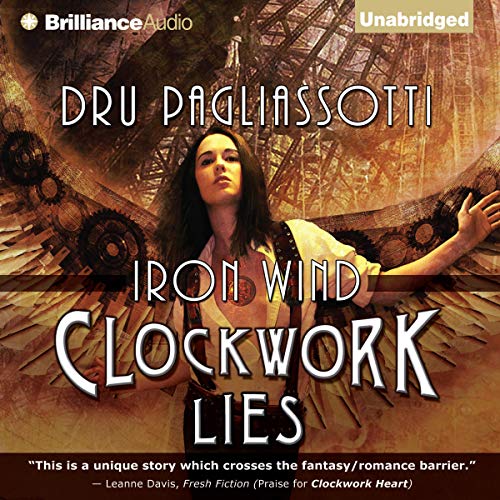 By: Dru Pagliassotti
Narrated by: Kate Rudd
Try for £0.00

Taya, the metal-winged icarus whose investigation helped defeat a plot against Ondinium and its populace, is assisting her exalted husband Cristof Forlore on his first ambassadorial mission. They must learn about Mareaux’s experiments in airship technology and determine whether the ostensibly scientific vehicles might be used for warfare - a taboo for Ondiniums, whose domination of the air is tempered by a deep cultural abhorrence toward airborne weapons after the devastation of the Last War 1,000 years ago.

I loved, and I mean LOVED clockwork heart. I wished for a sequel even though I didn't expect one and had horribly high expectations. Maybe that's why I felt a bit disappointed in Clockwork Lies. Although Cristof and Taya are married now it seemed like there wasn't much in the story that had them working together. I got a real Taya = Lone Ranger feel, and although the most action centered around her in the last book, I felt she had a lot more help from friends and neighbors. Also, - and this will sound weird - I disliked the villain. I don't want to give away the surprise so I will say that the villain as a general idea was good, but the specific people didn't work for me.

That being said, its definitely worth a read, or listen whichever you prefer. This one says that it's book 2 so I'm hoping a book 3 will come along soon. I also loved what this book does with Captain Ancathra (sp?) and its worth a read for that alone.


This is the second book in the Clockwork Heart trilogy. I really enjoyed this steampunk read, it was full of intrigue and adventure. This was a good continuation of the story started in Clockwork Heart. I love the characters and enjoy all the intrigue.

I listened to this on audiobook and the audiobook was really well done. The narrator has a higher pitched voice, which is always a bit surprising when I first start listening to these but I got used to it a few chapters into the book. The narrator does an excellent job with having unique voices for each character and does well conveying emotion too.

In this book Taya (an Icarus who uses metal wings to fly) and her exalted husband Cristof go on their first ambassadorial mission. They are sent to Mareaux to learn about Mareaux’s experiments in airships and weaponry. Things go awry when they stumble upon a plot that could mean war against their home country of Ondimium.

I really enjoy these books. I love Taya with her metal wings and her love of the air. I love Cristof with his gearhead sensibility and his slight confusion as to why Taya loves him. The two are married now and have a wonderful relationship that I really loved reading about. They both go through some very tough circumstances which require a lot of love, respect, and trust on both sides of the relationship.

The world building is really well done too. This is a broad and well thought out world; I love Ondinium with its large Engine that drives the whole city and I enjoyed seeing some regions outside of Ondimium as well.

There is a lot of intrigue and action in this book. There is also a lot of wry humor throughout. I just really enjoy the tone of this series.

Overall this was a well done continuation of the Clockwork Heart series. I loved the characters, the world building, and the intrigue and action. I would recommend to those who enjoy steampunk and fantasy reads. I will definitely be picking up the third book in the series at some point.