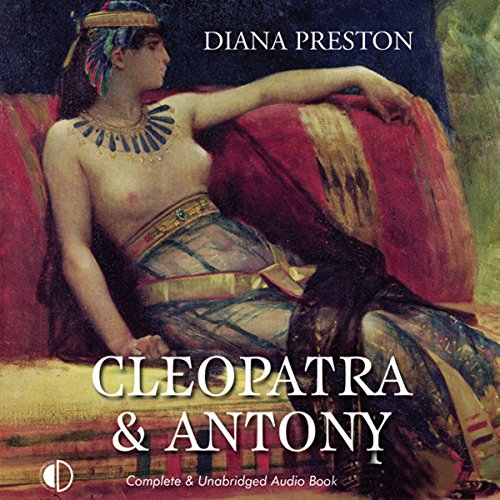 After Julius Caesar's murder, his mistress Cleopatra, Queen of Egypt, fled to Alexandria where she gave birth to their son. Civil war broke out in Rome, and Mark Antony, Caesar's friend, was given control over the East. Summoned to his headquarters, Cleopatra made her entry at dusk on a scented, candle-lit barge: and so began one of the greatest love stories of all time.

The affair between the ancient world's most famous celebrity couple became all-consuming, leaving them oblivious to the threat of doom building up against them. Now Diana Preston has delved into the real history behind the propaganda and myth surrounding this famous couple, breathing new life into this epic love story.

"A hugely entertaining book packed with information." ( The Guardian)

"...if you like your history spiced with descriptions of how Caesar and Cleopatra 'had attended fashionable parties together and were regarded as a couple' look no further." (The Guardian)

What listeners say about Cleopatra and Antony

I was not sure what to expect of this book, but I was very pleased. It is very informative, not just focussing on Antony and Cleopatra, but their families, political enemies and children. It is entertaining and shocking, and is presented almost as a story. So interesting, and a great introduction into a history I was not familiar with.