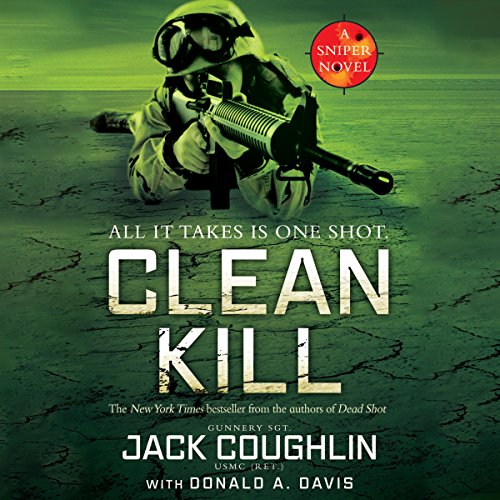 By: Jack Coughlin,Donald A. Davis
Narrated by: Luke Daniels
Try for £0.00

On the heels of the New York Times best-selling Dead Shot comes the most thrilling installment of the Kyle Swanson series yet, in which an attempt at a new peace in the Middle East is shattered by an unknown attacker, and only Swanson can find out who's responsible.

At a 15th-century castle outside Edinburgh, Scotland, Sir Geoffrey Cornwell is brokering an unprecedented agreement. Prince Abdullah of Saudi Arabia and the Israeli foreign minister are scheduled to sign a historic peace treaty - that is until their meeting is violently interrupted by a missile strike that leaves the foreign minister of Israel dead and Cornwell and the prince injured.

Gunnery Sergeant Kyle Swanson is running covert missions in the mountains of Pakistan when he's called away from duty. He leaves for the UK, where he thwarts another attempt on the prince of Saudi Arabia's life. The attackers are Middle Eastern, but they aren't working for Al Qaeda - they're employed by foreign operatives opposed to the peace agreement and determined to claim Saudi oil reserves for themselves by whatever means necessary.

Meanwhile, out of hiding and back from the dead comes Juba, one of the deadliest terrorists in the world and Kyle Swanson's nemesis, who is determined to exact revenge on the man who nearly took his life.

With scenes of tremendous suspense that span the globe, Clean Kill puts Swanson in the sights of a group whose greed and vengeance know no limits. But their deadly ambitions also bring them into his sights, which is the wrong place to be.

What listeners say about Clean Kill

I have really started to enjoy this series and look forward to listening to more. This book was full of action and was a great adventure. These authors remind me of vince flynn so if you enjoyed his books then you are going to enjoy this series. Another good narration. I think that I'm going to purchase the next in the series for my next listen.

The Couglin, Davis combo create this amazingly detailed and credible story line in which Gunny Swanson is dragged against his wishes to save the world. Whilst recovering nukes Gunny is being tracked by an old enemy.

What made the experience of listening to Clean Kill the most enjoyable?

I've enjoyed the Sniper series and for the most part, the former Gunny gets it right. However, I'm a bit of a stickler for Marine Corps traditions, equipment and the proper description of weapon functionality and performance.

It's irritating as hell and a major distraction to come across obvious, but easily corrected mistakes while in the middle of an enjoyable read. I wonder if the Gunny let his co-writer insert them without fact checking himself. Any former Marine would pick up on these blunders, so here goes...

A "Clip" is a spring steel holder for ammunition used in such weapons as the M-1 Garand, the '03 Springfield and other "push to load" rifles utilized during WWII and earlier conflicts. A pistol does not utilize a "Clip". A semi-auto pistol uses MAGAZINES which have an internal spring pushing up a follower which in turn feeds the weapon ammunition. Modern rifles use the same technology. It is called a MAGAZINE, damnit, not a CLIP! My drill instructor at Parris Island (KIA Vietnam) would punch me in the gut if I called a magazine a "Clip".

A Marine is described as wearing "BDU's". What? Huh?

The ARMY dresses up in BDU's (Battle Dress Uniforms), not the Marine Corps. We proudly wear "Utilities" or MARPAT (Marine Pattern) which is a digital camouflage uniform unique to the Corps. Don't ever confuse a Marine with an Army soldier. And don't call a Marine a Soldier, either!

During one sequence, an Air Force C-141 Starlifter plane is referenced taking off.

Gunny, the Chair Force retired the 141 several years ago. Marines do not fly in Chair Force planes anyway, that's why we have our own Air Wing.

OK, my criticism is done. I will assiduously nit-pick any Marine related aberrations I come across and try not to pound the wall in frustration when they do. Maybe my PTSD is kicking in a bit much these days, but I do love descriptions of terrorists taking .50 caliber rounds in the face. Keep these books coming. Semper Fi.

What a Great Series

I love this series. I sure hope Audible works to get all the books in the series into audible format. The characters are very well written, we get a feel for who they are and their personality. Our hero Gunnery Sargent Kyle Swanson is such a great character. Love the focus on the mission, the cool strategic thinking, thinking on many levels and moves ahead like chess - and yet a realistic character. Oh and did I say fun sense of humor? The supporting characters are also nicely done. There is plenty of action, the story is well paced, easy to follow. The narrator does a good job of different voices and accents.

I enjoy learning more and more about the main character in each book. I really like the character double O and I was happy he made it into this 3rd book.
I like the aggressive, straight forward style jack Coughlin uses in his book. His character Swanson is a no nonsense take no prisoner type operator so make sure you like that type character, because that is what Swanson is start to finish.

When I got out of he army years ago, I found myself trying find something to help fill that void I just lost. Then whisk in a book store I happened upon dead shot. I'm a slow reader but I finished that first book in 4 hours. I went back to the store the next day and order all of his book that were out. I even bought doubles to give to my dad, then bought the small mass market books. Mr. Coughlin is a great writer and a great solider. Keep them books coming sir.

Best one so far

This book grabbed me from the beginning. after last book was hesitant. glad I continued. Great listen for me.

Luke Daniels needs to narrate or do voice work for cartoons because that’s the voice he has. No human character would sound the way they do when he portrays their voice. Other than that I appreciate the work by the author that’s what keeps me coming back.

Great! as usual. The story was great, as usual. The voice intonations of each character needed a little more to make it a “5 Star”. Maybe a little too long, however. Still highly believable story line in this day of modern warfare and brinkspersonship! Ha! db

Not as good as the first two, but still a well writen book that makes you sit on the edge of your seat!

Great Book...well worth the time...

Great in a great series by a great writer...No slow down the action from start to finish...

one of my favorite authors and a tremendous read. Written by a real sniper it's hard for him to miss on these stories.