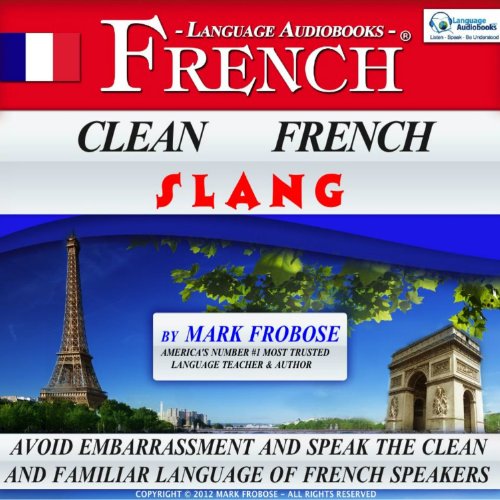 Finally you can trust a French program to teach you the best in clean and decent French slang. Avoid the fear and embarrassment than comes from using filthy language while abroad in France and learn to speak decent and authentic colloquial French like a native. Clean French Slang teaches you how to speak and understand the real spoken French of the French-speaking world that is considered classy and acceptable by the majority of native French speakers worldwide.

Interesting but not worth the money

Very little content to be honest. I’ve had free podcasts that had more info in 15 minuets that this had in 2 hours.

What made the experience of listening to Clean French Slang the most enjoyable?

Picking up phrases of great utility, in a manner of presentation that is both practical and painless, has been hugely enjoyable. This is the type of aural interactivity of which there is a certain scarceity on the market, making this collection of lessons particularly welcome. Technically repetitive, but very practical and an effective teaching tool.

Perhaps we non-natives can finally begin to understand what French twenty-year-olds are saying to each other in newer French films!

Say it in French Like Real French People Say It

Have you listened to any of Mark Frobose’s other performances before? How does this one compare?

I especially like his "Spanish for Love and Dating" audio program and his audio program called "Mexican Spanish Accelerated." Both are entertaining and effective 'specialty' programs.

At only about 2 hours, this is a very enjoyable 'one-sitting' program. That makes it easy to listen to again and again. There are two one-hour lessons. There is a lot of material but at 2 hours total there is not so much that it is overwhelming. You can easily listen to it a half-hour or an hour at a time, or even the whole thing in one 2-hour sitting.

This is a SUPER instructional program. If you already know the standard way to say things, as taught in French language textbooks, this program will teach you how to say those very same things in the common every-day language that native French speakers use. This is authentic French slang.Slang is not trash talk. Slang is not dirty words. Slang is the vernacular, in other words, the common speech, that all of us use every day, dozens of times a day, usually without even being aware of it. We are as much if not more likely to say “I’m ticked off “ as we are to say “I’m angry.” Sometimes you “don’t care” and sometimes you’re “fed up” or “don’t give a darn!” The French don’t just use one word for “wine” or for “food” and when you are speaking French neither should you. “Clean French Slang” will teach you to express yourself in a variety of socially acceptable ways. There are police officers in France, but are there “cops?” How do you tell your French speaking friends that you just got a ticket? That cop must be “crazy?” Or maybe you’re the one that’s “nuts.”Think that this French language audio program “is not the ocean to drink?” Think again. Learn some” Clean French Slang” and “you’ll have of a vein of gold” the next time you meet a French speaking person.

It is definitely useful.

Would you listen to Clean French Slang again? Why?

I would listen to it again to review the materials. I wish there was a PDF that you could access after buying it. I also wish there was more vocabulary, just a little more. It was very good, though. We could use more materials like that.