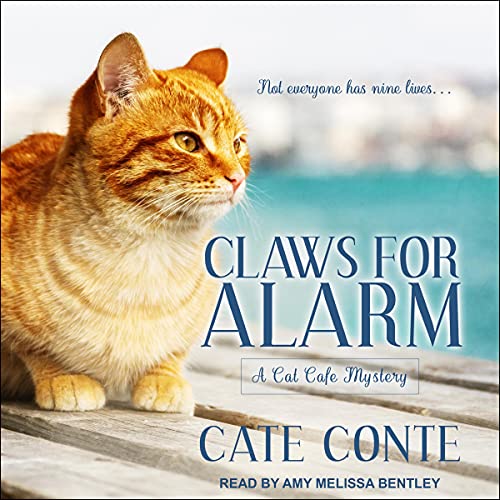 By: Cate Conte
Narrated by: Amy Melissa Bentley
Try for £0.00

In Claws for Alarm, the fifth book in Cate Conte's delightful and cat-filled series, it's the heart of the busy season, and JJ's House of Purrs is booming - until a killer is let off the leash.

Maddie James has finally given in to her friend Katrina's pleas to open up her cat cafe to more than 10 felines: They're now up to 15 purring friends. In fact, JJ's House of Purrs is making such a splash that she's getting national attention. The East Coast Animal Rescue League is quite interested in the cafe, and so Maddie accepts a request to meet with Laverne Gardner, the executive director. Laverne shows up at the cafe and asks Maddie if they can partner on a fundraiser to support the local rescue efforts - and she offers up her celebrity endorser and her celebrity cat to sweeten the deal. Maddie, caught up in the prospect, offers up her sister, Val, to help plan the event.

But when Val shows up for a site visit at the venue, she finds Laverne strangled with a fancy cat leash - a piece of swag they were intending to use for the fundraiser - leaving Maddie with a lot of questions to answer. Was her death a tragic one-off event, or is there something more sinister going on? Maddie has to figure it out fast, before anyone else in the rescue community is jeopardized.

What listeners say about Claws for Alarm

Claws for Alarm is an entertaining cozy mystery with an interesting plot and engaging characters. I look forward to the next book.

JJ, Maddy, Lucas, Grandpa Leo and the gang are taking care of the cats and getting into more intrigue - with Hollywood types this time. If you haven't read this series, start at the beginning and get to know these fun characters.