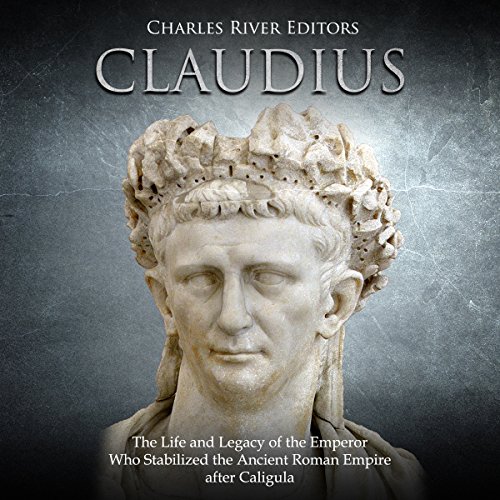 The Life and Legacy of the Emperor Who Stabilized the Ancient Roman Empire After Caligula
By: Charles River Editors
Narrated by: Colin Fluxman
Length: 1 hr and 31 mins
Categories: History, Ancient History
5 out of 5 stars 5.0 (2 ratings)

Throughout the history of the Roman Empire, many rulers held the reins of ultimate power. Some of them, like Octavian, Trajan, Hadrian, Constantine, and Marcus Aurelius, are still celebrated and considered among antiquity’s great statesmen, generals, and thinkers. But the Roman Empire also had its fair share of notorious villains, from the sadistic Nero to the debauched Commodus. And yet, all of Rome’s poor rulers pale in comparison to the record and legacy of Gaius Julius Caesar Augustus Germanicus, a young man remembered by posterity as Caligula.

Given how bad some of Rome’s emperors were, it’s a testament to just how insane and reviled Caligula was that he is still remembered nearly 2,000 years later as the epitome of everything that could be wrong with a tyrant. The Romans had high hopes for him after he succeeded Tiberius in 37 BCE, and by all accounts he was a noble and just ruler during his first few months in power. But after that, he suffered some sort of mysterious illness that apparently rendered him insane, and the list of Caligula’s strange actions became quite lengthy in almost no time at all.

Caligula has always fascinated people, and people have speculated for centuries whether the stories about his misdeeds are true, but what is clear is that the Romans had more than enough by 41 BCE, when the Praetorian Guard turned on the young emperor and assassinated him. Caligula’s reign was so traumatic to the Romans that they even considered restoring the Republic, but military officials ultimately installed Claudius, the only male left in the Julian family line, as emperor.

Today, Claudius is particularly remembered for the conquest of Britain, as Roman power there had weakened since Julius Caesar had invaded nearly a century before. Beyond this, he established Roman colonies on the frontiers of the empire, annexed several territories in North Africa (including Thrace and Mauritania), and made Judea a province. Claudius’s rule stands out in other aspects as well. He paid great attention to Rome’s judicial system and religious policy, and the Empire’s infrastructure was improved during his reign.

Claudius also made significant changes to the government's administrative system, increasing the emperor's control and using freedmen as the heads of several divisions of administration, such as the treasury. Additionally, he realized the importance of the provinces and worked to incorporate them into the empire fully.

What makes Claudius such a surprisingly effective emperor, aside from his strange route to power, was that he was considered physically and mentally incompetent for political life. At the same time, Claudius managed to take the throne against the will of the Senate thanks to the support of the Praetorian Guard, and despite his efforts to work with the Senate, the relationship would always be troublesome.

What listeners say about Claudius