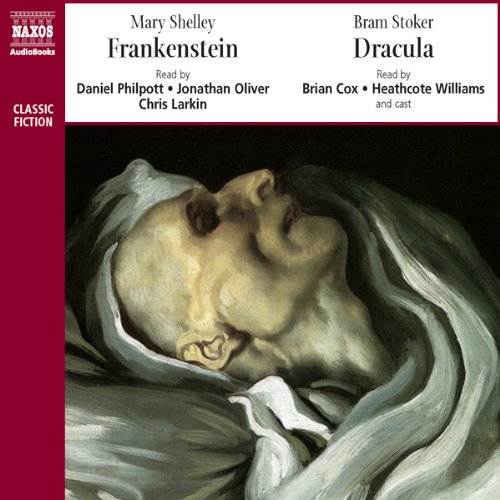 Bram Stoker's 1897 classic horror story expressing the most persistent nightmare of the human condition is brought to life by a skilled and imaginative cast, including Brian Cox as Van Helsing and Heathcote Williams as Dracula.

Authentic 'monster music', from the golden age of 1940s horror movies, is combined with a 'Dracula' ballet score and various sound effects to crate a gripping aural experience. Take this opportunity to dream again...

The gothic tale of Frankenstein and his construction of a human being which runs amok, has, with the help of numerous films, become one of the most vivid horror stories.

But Mary Shelley's original novel, written in 1816, dealt more sympathetically with 'the daemon', showing how an initially beneficent creature is hammered into a daemon by the way he is treated.

Her ideas, and her dramatic but poignant story, are brought to life in this sound dramatization.

What listeners say about Classic Thrillers

Be warned that this version is highlights only. If it isn’t the full narrative, it should say so in the title.

This is a great abridgement. It is a full cast audio book and has all the characters from both stories. All the main events are there. If you want to read an abridged copy of Frankenstein and Dracula, I highly recommend this one.

There is no Frankenstein in this audiobook!

There is a story missing; only Dracula is included. No Mary Shelley here. (Must have 15 words.)