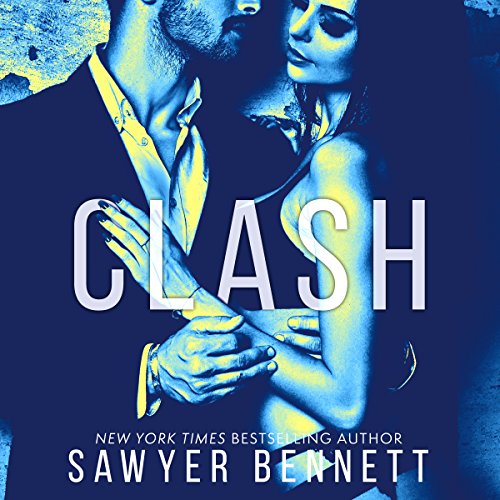 By: Sawyer Bennett
Narrated by: Kirsten Leigh,Lee Samuels
Try for £0.00

It might be fair to say that I despise Macy Carrington. She slings insults with precision, not caring about the destruction she leaves in her wake. We clash in a battle of wills every time we're around each other, and yet I still fantasize about being lodged deep within her body.

Clash (verb): to come together or collide.

I have never encountered someone that grates me the way Cal Carson does. His pompous, arrogant demeanor. A holier-than-thou attitude. Any interaction with "Saint Cal" ends in a verbal clash of epic proportions, and yet there's no one I'd rather have in my bed than him.

Her breathy moans mingle with the sound of our flesh coming together, clashing with the silence that surrounds us, dispelling any notions I once had about Macy Carrington.

Maybe I can break down her walls if we can call a truce to this battle.

He whispers filthy words in my ear, provoking feelings I never knew were possible. The burning desire in his touch clashes with everything I once believed about Cal Carson.

Maybe he can be the balm I need to soothe my broken soul, if only temporarily.

What listeners say about Clash

Loved sawyer Bennett's Legal Affairs series, and this story in my opinion is equally as good, if not better. I loved Cal Carson from the get-go and I loved his POV very much. Macy is a little more complex and I'm intrigued as to what has happened in her past. Macy's POV is slightly different too, it's written as a diary entry, I love it. The chemistry between them is literally off the charts, and I just love the enemies to lovers theme. A shame it's so short, on the plus side books 2 and 3 are twice as long. Book 2 here I come.

HOLY HOT!!! This little trilogy sure packs a lot into 12 hours!!! I loved their story, I loved how amazingly HOT they were together and I loved the story line... I loved it all! Cal & Macy are opposite of almost every book I've read this year and that just made it even better. I would have to say 100% Hot, 75% romantics/sweet and 75% gripping plot, what more could you want! The narration was perfect too!

I'm going to premise my review by saying I love Sawyer Bennett's audio books and I got really involved in the budding relationship between Macy and Cal. Macy and Cal and their story was so intriguing that I was hooked and had to finish the series. But I was really annoyed at the non-cliffhanger cliffhanger and even more bothered that this is a 3 book series. This book ended at a seriously awkward place -- I just didn't get why that was a cliffhanger.

Kristen Leigh and Lee Samuels did a good job narrating this book. I especially liked Lee Samuels narration. This duo made this an easy listen.

This story is worth a credit but I don't think it's worth 3 credits to get the complete set. I usually avoid stories that drag out into too many books but I finished the first book before I realized this was 3 book series.

I am DONE buying trilogies when a well-written, and edited story can be told in one book. Frankly, it's a ripoff to the reader and lacks integity on the part of the writer and publisher. I returned the second two books in this series because I felt that the story was worth one credit, but definitely not three!

What could Sawyer Bennett have done to make this a more enjoyable book for you?

It was a great story. Sawyer Bennett could have produced this in one volume. I have all the Wicked Horse Series and they're excellent so I know she's capable. I am just disappointed in this shoddy manuever to extract more money from fans.

What didn’t you like about Kirsten Leigh and Lee Samuels ’s performance?

Their performances were excellent as always.

If you could play editor, what scene or scenes would you have cut from Clash?

I'm not going to do the editor's job here. But it's obvious the three volumes Clash, Grind and Yield could be condensed into one volume instead of leaving the readers with two unnecessary cliffhangers.

This book is smokin!! Macy is so uninhibited and obviously a little broken, and Cal so cool and dirty himself!! Sawyer Bennett knows how to write these panty dropping, sexy and delicious books. I really like Lee Samuels narration. His female narration is more believable of the Macy character. I like Kristen Leigh but not for this series. Doesn't matter though, I am going to continue with this series. Its hot!! ♨️♨️⚡⚡🔥🔥

Be ready because it ends abruptly!

If you could sum up Clash in three words, what would they be?

Too. Damn. Short. It's a good book, but I suspect the author didn't choose to split her book up into thirds. At the reduced price of $14 a pop, that makes this saga x 3 books a $42 read. Ms Bennett, I like your books, but you need a less greedy publisher!
That said, this is sexy, funny, rather poignant and sizzling hot.

It's the start of something good. I also like the inventive and unique not always so passionate sex.

Have you listened to any of Kirsten Leigh and Lee Samuels ’s other performances before? How does this one compare?

I enjoyed this book it was quick, short and hot and ends with a cliff hanger, not my favorite, but well written and well performed just the same

Too short, but good performances

It's a decent little excerpt from the full series, but not really enough to be sold separately. The narrators performed well, but just not enough material.

Clever way to make money. Split one book into 5. Good story, but the length is really disappointing.

I loved the story but I honestly don't think this short "snipit" can be called a full book since it's so short is ridiculous. Good story, good sex, just really short,so definitly don't waste a credit but may be worth the $ ONLY if your planning to invest in all 3 books in the series.