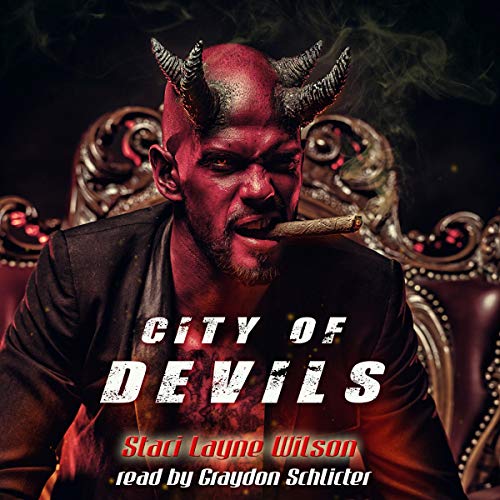 Los Angeles and Lucifer are a lot alike. They both seduce and lure with promises of wealth, fame, beauty, or love. But those promises are often empty; and even when they’re not, there’s a price to pay.

Come meet the denizens of City of Devils: Natasha is an underrated actress who goes to great lengths to win an Oscar in “Based on a true story.” In “Doom for Rent” a young man takes on a roommate to make ends meet, only to find he’s opened the door to pure evil. Geneva Hughes is a wealthy celebutant who loves her chihuahua, Boo-Boo, to death in “Ankle Biters.” Private dick Max Ryker gets more than he bargained for in “The Case of the Butchered Bombshell”. Tourist Ethel learns there’s no such thing as “Free Admission”. Child actor Cosmo Colombo finds out what he’s made of when The Big One hits LA in “Richter Mortis”. Are the paparazzi soulless? Find out in “Remote Trigger”. A narcissist devours the weak in “Depraved Indifference” while the meek fight back against a sleazy film producer in “He Was Asking for It”. Partygoers in “Abracadaver” practice supernatural sleight-of-hand during a séance at The Magic Castle. A psychic shyster gets his comeuppance in “My Mother the Carcass” while Malibu surfer Bjorn meets a malicious mermaid in “Tasty Waves”. Lastly, a lonely lady’s desperation to be thin and beautiful could cost her her life in “Alice on Wonderland”.

What listeners say about City of Devils

I wasn't sure what to think about this complication when I got it at first as I've been on a bit of a loosing streak with my choices but I was genuinely pleasently surprised and would recommend it to any horror/supernatural fans. Each story is very unique and very well written. Also the narrator is great at modulating his voice to match the character and situations.
I personally loved the 3rd story which the cover is representing (think killer Chihuahuas in Bel Aire). This will definitely be listened to again!

These stories will linger with you!

From the very first story in this anthology I knew I had stumbled on something wonderful and haunting! Staci Layne Wilson does a wonderful job of capturing locations, feelings and the atmosphere of Southern California and I (since I live in Southern California) am now looking at these places with different eyes. From the ocean and beach, LACMA , The Magic Castle, Night Clubs , Universal Studios and even red carpet events, This collection will take you around SoCal as a tourist but also leave you unsettled by what you have seen and visited. My personal favorite story was actually two. I really enjoyed Ankle Biters (cause it has me smiling when I see people out with their little dogs) and The Case of the Butchered Bombshell which was very much of the Noir variety. (who doesn't love a good Noir!) Also I will give a shout out to He was asking for it, because it was a great way to open this collection. The author has a wonderful talent with description and I promise these stories will last with you for months.

The narration by Graydon Schlichter was incredible. He did so many voices that brought life and preceptive to each character he voiced. And there were a few times I found myself holding my breath I was so gripped by his story telling. Very impressed. There were also some effects in this story that sent shivers through me.
All in all, this is the perfect way to spend a road trip with friends, or a night in the house when it is stormy and chilly or even just a sunny day that seems just a bit too bright!