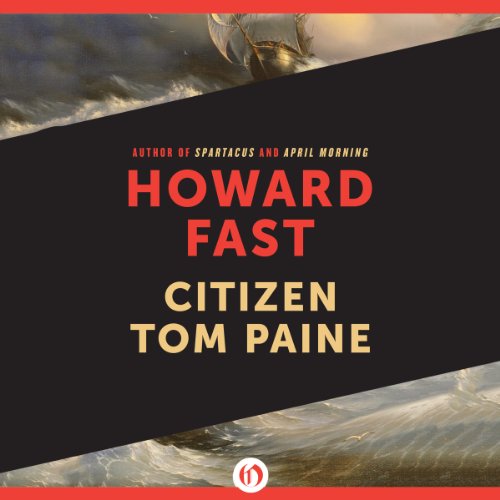 Fast’s 1943 fictionalized biography looks back at the life of the 18th-century English-American author and revolutionary. A pamphleteer, Paine was responsible for political writings like "Common Sense" and "The Rights of Man" that helped influence the thought of American revolutionaries like Thomas Jefferson and Benjamin Franklin (who later helped him to emigrate). Fast paints a complex portrait of Paine, a hard-nosed, coarsely mannered loner whose idealism could never be compromised.

Kipiniak’s voice rises in inflection and speed during passages of dialogue, then slows down, for dramatic effect, in Citizen Tom Paine’s more affecting moments.

Among Howard Fast's historical fiction, Citizen Tom Paine - one of America's all-time best-sellers - occupies a special place, for it restored to a generation of readers the vision of Paine's revolutionary passion as the authentic roots of our national beginnings. Fast gives us "a vivid picture of Paine's mode of writing, idiosyncrasies, and character-generous, nobly unselfish, moody, often dirty, frequently drunken, a revolutionist by avocation" (Library Journal).

I thought I knew quite a lot about Paine. I stand corrected. The author has indeed made an irascible Paine into a very human figure. A veritable tormented soul, a clinically depressed, irascible alcoholic, who using his pluck, not only survived until 72 of age, but influenced the course of 2 nations. Whether his actions proved beneficial to either nation, ultimately salutory or not is for continued debate.

I think author did a remarkable job of describing the illiteracy, backwardness, ignorance, and low estate of those people in the 3 countries, England, France, and the U.S. I greatly question these people's ability to govern themselves. (I grew up in slums. My parents always voted for policies that increased their low estate.) It illustrates how easily the uneducated, generally uninformed people of the world, can be manipulated. A favorable answer to the question of whether this type of people, however pathetic and sympathy engendering their conditions arre, may not be WISE enough to intelligently govern themselves. Mao's successor, when asked about historical consequences were 200 years later, responded, presciently, "We don't know yet!"

Ben Franklin, in 1789, said, "We have made a republic, IF WE CAN KEEP IT." America's history, contary to commonly held myth, has had a very rocky , uneven course, with only a few highlights. After Russian revolution, putting Lenin in power, the Romanovs still actally governed Russia. The American mistake is that "anybody can govern." Not so. Though people may be legally BORN equal in Jeffersonian and Lockiaing theory, I greatly question the reality of that premise. To treat people equally is to treat them unfairly, for they are not equal. The rich are ALWAYS "more equal than the rest" in ALL of their dealings.

Plato understood well the plasticity of the masses, their propensity for being manipulation by the tawdry uthorblandishments of clever despots.

I am again reminded that the people of Paine's day were also manipulated by a group of wealthy, hot headed Bostonian smugglers. and disgruntled slave holding Virginians. Fiery clergyman Patrick Henry's "Give me liberty or give me death!" was not uttered for freedom of religion, but for freedom from British trade laws.

Though the author made Paine human, it does not serve as a hagiography.

A Very Flawed Study of a True Revolutionary

The fact that this is a poor novel does not make it a worthless book. Tom Paine is a fascinating and complicated historical figure, and the particulars of his life alone would make a lightly fictionalized account worth reading. Howard Fast wrote this book against a backdrop of the promise of the New Deal and the tumult of the Second World War, and this imbues the narrative with interesting political and philosophical overtones. Fast joined the Communist Party the same year that this book was published, and it’s clear that he thinks of Paine (at least in his younger years) as a proto-Marxist revolutionary. Indeed, it often seems as if first Paine and then Fast laid out a blueprint for a latter day globetrotting insurrectionist like Che Guevara.

Unfortunately, none of these points excuse the quality of the book’s prose, which is almost always flat and artless. I have a lot of respect for Howard Fast as an idealist and a man of action, but reading him leads me to suspect that—true to his name—he wrote very quickly, with little regard for editing. How else to account for the many repetitive phrases, or the mealy-mouthed formulations, as when he describes the Prussian leftist Anacharsis Cloots as “much like Paine, and very much unlike him?” Such an equivocating judgment adds nothing to our understanding of either man.

The performance of the text only makes matters worse. The tone of moustache-twirling melodrama inherent in Fast’s dialog is not improved by the reader’s portentous delivery. The less said about the rogue’s gallery of accents employed for the various characters, the better. The biggest problem with the performance is one for which there is at least a remedy. The actor reads the text so slowly that I truly wondered if there was a technical flaw in the recording. I listened to the book at x1.4 speed—an increase that would render most books unintelligible. At that speed, the delivery had a slightly staccato but otherwise normal cadence.

Fun fact: I was led to this book by the late Philip Roth, who read it at the age of fourteen and later acknowledged it as the fuse that lit his literary aspirations. The simple, declarative writing brings to mind a lot of young adult fiction, and it isn’t hard to imagine an adolescent in the 1940’s or 1950’s being inspired by both Paine and Fast’s fervor. That figure of Roth’s stature could have his imagination fired by Citizen Tom Paine is further proof that even bad books can be put to good uses.