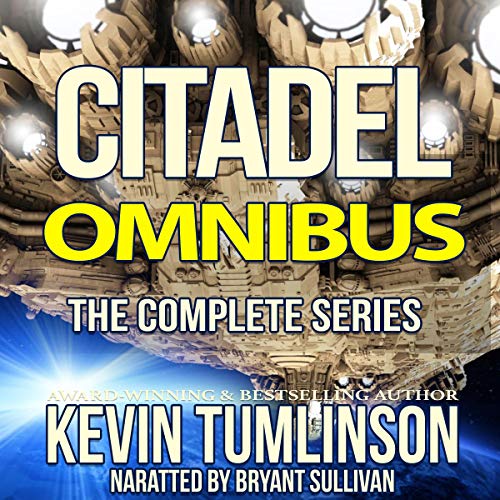 Citadel: Omnibus is the fully collected Citadel Trilogy, bound together in one volume for the first time!

More than a century ago, Earth was suffering under the weight of overpopulation and ever-dwindling natural resources. Humanity’s best and brightest were commissioned to create a means for humanity to escape the overcrowding of Earth, and to branch out and live among the stars. Their efforts were hampered by the seeming impossibility of faster-than-light travel, until a team of researchers discovers an usual answer they call “the Lightrail”.

On the eve of Earth’s first successful jaunt to the stars, however, a powerful organization called Earth First commits a horrible act of terrorism, setting the program back by decades. A single figure, "the Destroyer of Worlds”, now stands among the most villainous men in history.

A century later, humanity is recovering from a 50-year war with the Esool, a plant-like race that has its own version of the lightrail. Territorial battles raged after miscommunications and fear took their toll, leaving both sides compromised and weakened, with no choice but to come to peace.

Onboard the Citadel colony vessel, humanity and Esool are embarking on their first journey of peaceful joint colonization, when history tragically repeats itself. An Earth First saboteur has put the vessel on a crash course with the wrong world, and the results of this errant journey could cost humanity all it has gained.

A group of castaways on a world far from home are all that stand between humanity, the Esool, and the end of faster-than-light travel. And, as the Destroyer of Worlds reawakens in the universe, all hope may be lost.

Scroll up and grab this audiobook today.

What listeners say about Citadel: Omnibus: The Complete Citadel Trilogy

Loving the story and performance! Such great range in the characters. It’s clear a lot of care went into this recording.