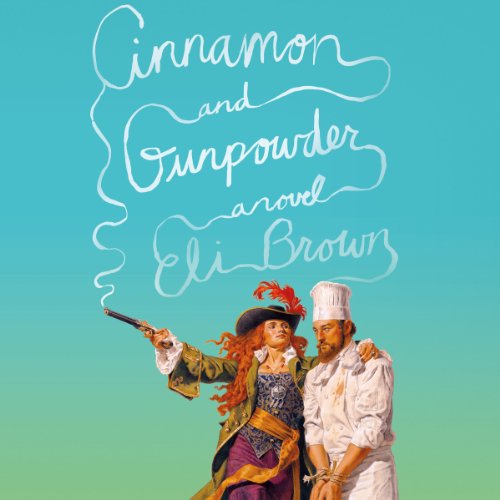 A Novel
By: Eli Brown
Narrated by: James Langton
Length: 11 hrs and 50 mins
Categories: Fiction, Historical
4 out of 5 stars 4.1 (7 ratings)

A gripping adventure, a seaborne romance, and a twist on the tale of Scheherazade - with the best food ever served aboard a pirate's ship.

The year is 1819, and the renowned chef Owen Wedgwood has been kidnapped by the ruthless pirate Mad Hannah Mabbot. He will be spared, she tells him, as long as he puts exquisite food in front of her every Sunday without fail. To appease the red-haired captain, Wedgwood gets cracking with the meager supplies on board. His first triumph at sea is actual bread, made from a sourdough starter that he leavens in a tin under his shirt throughout a roaring battle, as men are cutlassed all around him. Soon he's making tea-smoked eel and brewing pineapple-banana cider.

But Mabbot - who exerts a curious draw on the chef - is under siege. Hunted by a deadly privateer and plagued by a saboteur hidden on her ship, she pushes her crew past exhaustion in her search for the notorious Brass Fox. As Wedgwood begins to sense a method to Mabbot's madness, he must rely on the bizarre crewmembers he once feared: Mr. Apples, the fearsome giant who loves to knit; Feng and Bai, martial arts masters sworn to defend their captain; and Joshua, the deaf cabin boy who becomes the son Wedgwood never had.

Cinnamon and Gunpowder is a swashbuckling epicure's adventure simmered over a surprisingly touching love story - with a dash of the strangest, most delightful cookbook never written. Eli Brown has crafted a uniquely entertaining novel full of adventure: the Scheherazade story turned on its head, at sea, with food.

Not what I was hoping for.

This turned out to be a bit of a disappointment. I think it was most likely a victim of my false expectations. I was expecting a fun and hilarious historical romance romp. What I actually got was a weird historical fiction with a touch of fantasy and a tiny bit of romance.

Mad Hannah Mabbot, the notorious pirate captain, is a terror on the high seas and a thorn in the side of the prominent Pendelton Trading Company. During a raid where she kills a high ranking Pendelton official Lord Ramsey she decides to kidnap his cook. That cook is Owen Wedgwood. She gives Owen a simple choice, cook her a Sunday meal fit for a Queen each week or suffer the same fate as his former master.

My main issue with this was the lack of humor and romance. It was a fairly dark read at times as the pirates were not the most moral of characters you will ever encounter. It also painted a fair picture of life in the 1800s, which was pretty bleak for a lot of people! I did warm a bit to both Mabbot and Owen towards the end of the story, but they were hardly the most likeable characters I've ever encountered.

All in all this recovered from a bad start to solidify into a fairly average story.

James Langton did a decent job with the audio.

What did you like most about Cinnamon and Gunpowder?

I liked this book from the very beginning! The voice is very pleasant to listen to. This is the way I like an audiobook to be narrated. This is how I like my audiobooks. If you like this book, then also listen to A high wind in Jamaica by Richard Huges. It is also about pirates (and children) and also a nice story and very well read.

The cook, of course

Have you listened to any of James Langton’s other performances? How does this one compare?

Not yet, but I will in future!

It was hilarious at times

a win for me

Cinnamon & Gunpowder is one of those books that you think you can explain quickly. You can’t. The basic elements (wild-haired lady pirate, stuffy chef, excellently-named nemeses, and high-stakes adventure) combine into a fantastical gumbo as wonderful as the cooking described within. It all seemed simple at first, but then when attempting to describe the plot to a friend, I found myself standing on a chair, thrusting a cutlass at imaginary rivals, shouting “OH! OH! AND THEN—“; it begs exclamation and exuberance.

Though exciting on the surface, Brown is also telling a deeper story of corruption, loyalty, the benefits of moral ambiguity, and ultimately, how we make our families. I haven’t been this excited about a leading female character in a long time. Highly recommended for fans of Blood Bones & Butter, Bloody Jack, and Downton Abbey - Master and Commander fans, you’re encouraged to take note as well. If you like adventure, if you like pirates, if you like food, this book belongs in your library.

James Langton's narration is not entirely what I was expecting, but I think he did a good job of relaying the protagonist's worldview and generally stuffiness.

Nice story, new ideas, kept me interested but not invested in the characters. The cooking aspect was a new twist and I liked that, the rest was fairly average.

Loved every bit of this book. From the bang of a start to the meal descriptions, unfolding action, loss, love, and redemption.
I am left forever mourning the memory of the characters in this book.

Entertaining with a strong underlying message

I really enjoyed the pace and story line of Cinnamon and Gunpowder. We are reading this book for our book club and it will give us quite a lot of big picture ideas to discuss.

I have to say this is one of the more bizarre premises for a book, but it was so much fun. I can handle a little bit of swashbuckling and sea stories, but Horatio Hornblower and Jack Aubrey are always a little more technical than I deem to be "fun." But a story with foodie pirates? I love it. Even though one would imagine the food on ships to be somewhat lacking, I found myself getting hungry listening to the great descriptions of the meals put forth by the protagonist (minus the bread made with a starter that he wore on himself to keep warm).

I cannot praise this book highly enough. The story is so original and exciting - it kept me spellbound for hours and I was bereft to have to leave the magic web it wove when I finished. The great humanity of the characters, their depth, creativity and wit is a marvel. Of course, it is the creativity of the author, Eli Brown, which is the real marvel. Three cheers for Audible and Farrar, Straus and Giroux for publishing this unusual gem. I was cheering for the captain, chef and crew of the Flying Rose, as marvelously ethical a group of pirates who ever sailed the seas, as they took me along on their fabulous quest. The selfish depravity of the capitalists is exposed. Organized religion is right and truly mocked. And the cleverness of the plot, which never seems contrived, was such a joy. That it does not have more readers and more 5 star reviews is a wonder. I had this book in my wish list for over a year. I came to it because I am a great fan of the reader, James Langton, who does the book justice.

I truly hope that Eli Brown will collect and publish his short stories and give us another novel before too long. This is one of the best listens ever! I am so glad I decided to listen. You will be too!

Charming, funny, and thrilling, but deeply honest and sad at times as well. A wonderful read for a rainy day, and definitely something I will come back to.

NOT THE USUAL PIRATE STORY

The chef is forced to be resourceful in many different ways.He has to shed excess baggage. The pirate captain has her ways. The crew are true pirates. I loved the creativeness and the narrator.

Amazing that pirates can be so boring

My book club was reading this book so I forced myself to go through the whole thing. It's a great concept, but the book was quite predictable and boring. I felt like I was being lectured at a good deal of the time, but I really enjoyed the descriptions of food which were a bright spot in the narrative. Also, the narrator was good, but he doesn't know how to pronounce mole, which is a sauce. He pronounces it like the burrowing animal and that was rather distracting. I kept looking at the display on my phone to see how much I had left to go. If you're looking for a fun summer adventure tale, look elsewhere.

Not nearly as much fun as it could have been

Would you try another book from Eli Brown and/or James Langton?

I am not sure - I certainly wouldn't buy one as soon as it came but would wait for reviews.

What was most disappointing about Eli Brown’s story?

The main character wasn't very likeable - he kept making stupid moves in the course of the story by trying to escape and then 'suddenly' decided he was happy living on the boat.

Who would you have cast as narrator instead of James Langton?

I am not sure - I couldn't decide if the lack of likeability of the main character was due to the narration or not. Whenever you are listening to an audiobook and you find yourself just tired of hearing a voice - it isn't a good sign. He seemed to drone on and on but that could also be the fault of the story.

Do you think Cinnamon and Gunpowder needs a follow-up book? Why or why not?