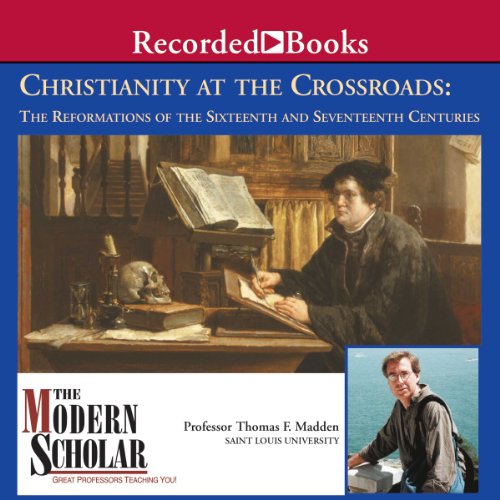 Christianity At the Crossroads

Esteemed history professor Thomas F. Madden explores the reformations that swept across Christendom in the 16th and 17th centuries. The impact of these reforms affected government, popes, and kings as well as commoners, for at this time the Church was an omnipresent part of European identity-and the import of Church reforms on every level of life at this time simply cannot be underestimated. Involved in this fascinating era are such notable personages as King Henry VIII, Martin Luther, and John Calvin. Through every aspect of this remarkable process of reformation, Professor Madden captures the essence of the era-and imparts a true, studied understanding of just what this time period meant to the course of human events.
©2007 Thomas F. Madden (P)2007 Recorded Books
Christianity
Show More Show Less

What listeners say about Christianity At the Crossroads

I an something of a fan of Professor Maddens'lectures, I like the way he present complicated historical situation and narratives in short succinct series of lectures. This one certainly did not dissappoint. This lecture certainly did change my view on the Catholic church. A great buy for highschool seniors and undergrad students.

Great History Class on Era that Still Effects Us

My previous knowledge of these reformations centered around the theological aspects involved. However, after listening to Dr Madden's lectures it is obvious that trying to understand the theological concerns without a proper understanding of the history involved, particularly in the first reformation, is a mistake.

Most Protestants and Catholics today have a very limited knowledge of the history of the the Catholic Church. After listening to this class, I am convinced most of my more scholarly Protestant friends and I have very little knowledge of the history surrounding key events and figures on both sides of the conflict. It's safe to say I know of no one who knows or cares of the reformation within the Catholic Church.

Yet, regardless of whether one believes in God or not, these events in the 16th to 17th centuries dramatically effect how we live today. This class leads me to look at my own faith in a different light altogether.

I've been studying the Reformation quite intensively, especially in England. Many people who write about religious subjects don't disclose their own religious commitment, though the most honest ones do. I always listen for indications of bias. I've never heard it so blatant as in chapter 10 of this work though I had wondered before in earlier chapters, hearing certain word choices, and tones of voice.

2) that Henry's motive for dissolution of the monasteries was solely greed for their money and that monks and nuns were lined up and forced to marry.

3) that Henry's biblical ground for believing his marriage to Catherine was unlawful, Leviticus 20:21. applies only to cases of divorce, not widowhood.

I have never before come across any author, of any background, saying or even hinting these things. Most acknowledge that Henry and Catherine told different stories about the consummation of her first marriage. Most acknowledge the financial motive in the dissolution, but also recognize the Protestant influence of Anne Bolyn and Thomas Cromwell. The story of monks and nuns being lined up for forced marriage seems unbelievable on its face and I've never heard of it before. As for the Bible, Madden cites Deuteronomy 25:5-6 though it's actually stronger than what he says; it commands a man to marry the childless widow of his dead brother, specifically to provide an heir for the dead. But I've never heard of anyone else saying that Leviticus 20:21 applies only to divorce, which is what he claims.

Throughout the work, Madden is trying to cover a lot of ground in a brief time, and is often rather sloppy in his summaries. But in this chapter he is either ignorant of the field or deliberately engaged in special pleading for the Roman Catholic supporters of Catherine of Aragon and Mary Tudor. Most historians give a taste of all points of view; here Madden does not even acknowledge other possible ideas.

p.s. Another clear case of bias is that he blames the St Bartholomew's day massacre soley on Catherine de'Medici, not even acknowledging other possible culprits, of whom there were several. He makes no mention of Pope Gregory's public approval of the massacre.

Delivered in a halting way, which is very bothersome and makes the listener wonder if the lecturer really doesn't know his stuff, is unorganized and unprepared or is just not good at lecturing! Additionally, he gets Luther's theology glaringly wrong in some key places.

Compare this The Modern Scholar lecture with Brad Gregory's The Great Courses lectures on the Reformation to see a well delivered flowing (non-halting) lecture with live audience, and a content that tries to be sympathetic to all sides and portray each one's theology faithfully.

An EXCELLENT, and FACTUAL work

Madden is an excellent professor. His analysis of historical events is wholly without bias, which is HIGHLY unusual with this subject matter. I recommend this work to anyone interested in TRUTH, versus opinionated fiction.

All of Dr. Madden's lecture series are good, and this one is no exception. There's never a dull moment in the entire series.

really enjoyed it. i recommend it to anyone interested in an objective take on this time period.

Another excellent lecture series by Thomas F. Madden. He has a gift for explaining history in a way that most people can understand.

I found it fascinating. I enjoyed the way it was delivered without a leading toward a certain viewpoint.

I've have been a contented audible listener for 3 or 4 years now. Some titles not so good, some fantastic.

But this one does NOT download!!! Yet all signs (from Audible's side, say it has).

Oh yeah, you can't review unless you give it at least one star - this should be negative stars!