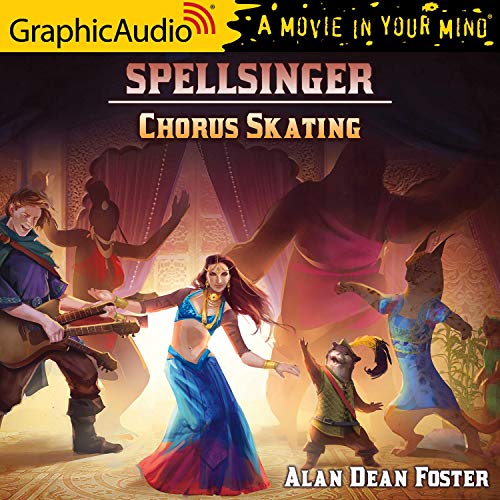 Middle-aged, lazy, and out of shape, spellsinger Jon-Tom attempts to break out of domestic drudgery with one last great adventure.

Jon-Tom and Mudge are bored.

Their adventuring days long behind them, the spellsinger and his once-thieving otter sidekick have settled into a life of tepid domesticity, and they are sick of it. They hunger for an old-fashioned adventure, but there are no more great evils to combat. And so they decide to follow the music. Literally.

A drifting cloud of lost chords has taken to floating around Jon-Tom, and following it puts them on the trail of an evil that terrifies the spellsinger. Something is stealing music. Finding out who, and why, is responsible for the silencing of the instruments will put Jon-Tom and Mudge into great peril, at the hands of a selfish elephant, a greedy black bear, and a whirlpool with a filthy sense of humor. Seeking adventure, they’ve stumbled into one turn that may turn out to be their last.

I've been a fan of the spell singer series since I was a young teen. Now in my early 40s I find it very comforting to be able to go back and review this beautiful science fiction series by Alan Dean Foster as a collection of audiobooks that feel more like an old time radio drama.

So yeah... if you're a fan of truly amazing science fiction and fantasy series then by all means you really should give any book in the spell singer series a listen.