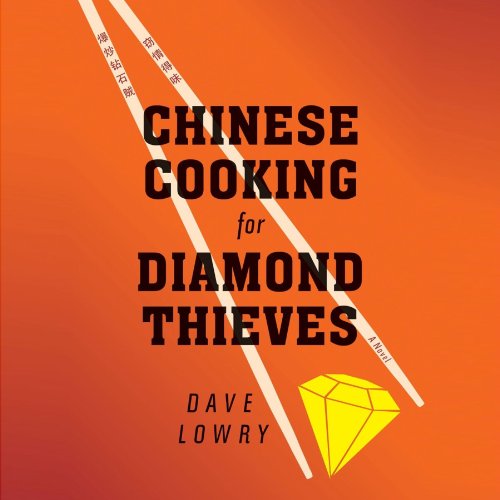 By: Dave Lowry
Narrated by: MacLeod Andrews
Try for £0.00

Driving home after being kicked out of college, Tucker meets and picks up the mysterious Corinne Chang at a rest stop. Infatuated, and with nothing better to do, he ends up with her in St. Louis, where he gets a job as a chef in a Chinese restaurant. Even though he’s a gwai lo—a foreign devil—his cooking skills impress the Chinese patrons of the restaurant, and his wooing skills impress Corinne when she joins him there as a waitress. But when Chinese gangsters show up demanding diamonds they believe Tucker’s kind-of, sort-of, don’t-call-her-a-girlfriend stole, he and his friends—which luckily include a couple of FBI agents—have to figure out just who is gunning for Corinne and how to stop them. Good thing Tucker is a Mandarin-speaking martial arts master who isn’t afraid to throw the first punch.

With its one-of-a-kind hero, Chinese Cooking for Diamond Thieves is perfect for anyone who loves cooking, Chinese culture, bad jokes, and young love. Diamonds are forever . . . unless Chinese mobsters decide they want them back.

What listeners say about Chinese Cooking For Diamond Thieves

If you have read any of Lowry Sensei’s nonfiction you know that his research and knowledge runs deep. In this book we find that Sensei can also forge a fun and worthy plot line. Highly recommend this book for something enjoyable to read that contrasts many current novels.

Loved the narrator of this book. Great story, like the humor and full of action.

After listening to To Kill A Mockingbird I needed something different and fun. Something to divert more than inspire. Chinese Cooking ... was the perfect choice. A good story with well defined characters, good recipes