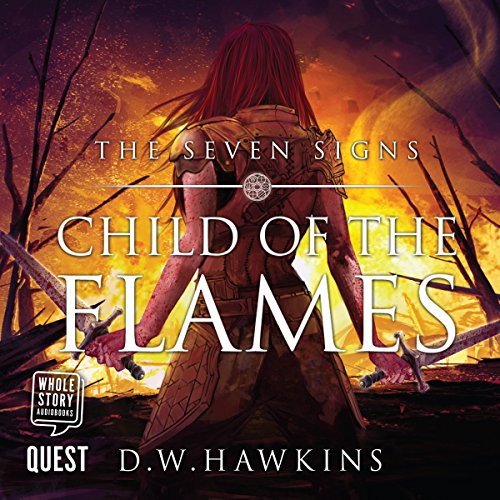 Child of the Flames

For fans of Robin Hobb.

Her father had been right. If she left it here, then everyone who had died - her father, her sister and everyone she had ever loved - would have done so in vain.

The Red Swords came with the sunrise and took everything Shawna Llewan held dear. Her family massacred, her home destroyed, she escapes with nothing but her mother’s heirloom and the desire for vengeance. When she’s found by Dormael, a Warlock of the Conclave, she learns that her mother’s keepsake - the very reason her family was killed - holds the power to unleash boundless destruction.

Dormael and Shawna must flee for their lives before a vengeful enemy and guard against the deadly secret it seeks to unearth. Some secrets are best left buried, and vengeance must be pulled from the fists of the gods. With danger closing in around them, Shawna and Dormael are left with little choice. Will they escape, or will they drown beneath a tide of blood?

What listeners say about Child of the Flames

A good start to an interesting series

This story started off with a fairly cracking opening chapter. It slowed down over the remainder of the first half, but we learn a good bit about the main characters of the story in this section. The last half picked up speed and finished with a good battle. The closing epilogue goes a little way towards explaining the name of the series.

The narration was good and well paced, with reasonable characterization for the various characters. The American English of the story tended to intrude for me ("gotten", "off of", for example, are frequently used). Overall, though, I enjoyed the story a lot and have purchased the next one in this series.

I wonder when the next ones out. I want to know what happens next to these engaging characters.

This book starts out by dropping the reader into an intense and bloody scene, promising everything you'd expect in a grimdark series. The rest of the book eases up (mostly) but still offers plenty of action, magic, and witty banter wrapped around the group's protection of a rescued child and a mysterious artifact. Good and evil characters are all well fleshed-out. and the fight scenes sufficiently graphic. This is my first book featuring Malk Williams, and his narration is absolutely top-notch. I will definitely pick up the rest of the series.

it started with red but went to a little girl foe np reason. didn't make sence.