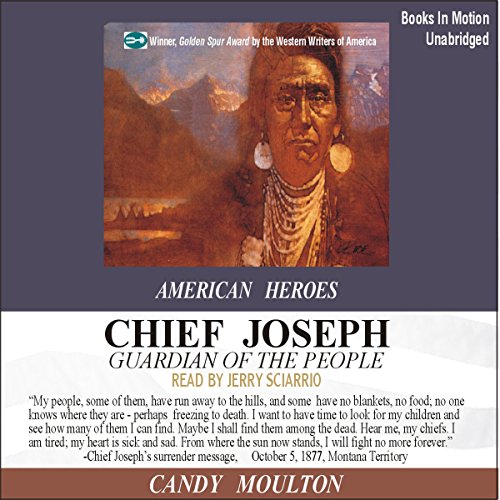 By: Candy Moulton
Narrated by: Jerry Sciarrio
Try for £0.00

Chief Joseph, of the Nez Perce tribe, lived from 1840 to 1904. He became a legend through his heroic efforts to keep his people in their homeland in Oregon's Wallowa Valley. For years he tried to accommodate encroaching white men on his tribal lands, but finally gave up and attempted, in the fall of 1877, to lead his people safely to Canada.

Born in 1840, Joseph was present at the signing of the 1855 treaty, which allowed the tribe to hold on to a five thousand square mile region in Idaho and Oregon, including their beloved Wallowa Valley. By 1877, a year after the Battle of Little Bighorn, word came from Washington that they had to move to a small reservation instead.

Joseph, now chief, decided to take his people through Yellowstone and Montana, hoping to join Sitting Bull and his followers 300 miles north in Saskatchewan. They were caught by U.S. Army troops just 40 miles short of their goal, in the Battle of the Bear's Paw.

"Moving and well documented, this is a superb addition to the American Heroes series." ( Booklist)

What listeners say about Chief Joseph

Reading about the flight of the Nez Perce and the disregard of treaty by the US government, one begins to understand the plight of the Nez Perce Wallowa band and by extension, the extant Indian culture before Manifest Destiny. The book is short and well researched--the story is extremely compelling. Moulton describes in some excruciating detail about place names, battles fought...maybe one might want to visit those places? I got the book, looking for more developed characters; Joseph was a developed character, but others were not. However, the emotional and intellectual views of the people were well made. A quick, non-intellectual read that doesn't compare well with other popular biographies.

This book is to much like reading a history book. The book for the most part is dull.

What was most disappointing about Candy Moulton’s story?

In stead of writing the book like a history book, it would have been more interesting to tell it has a story. A living story--not a dull recounting of the historical facts.