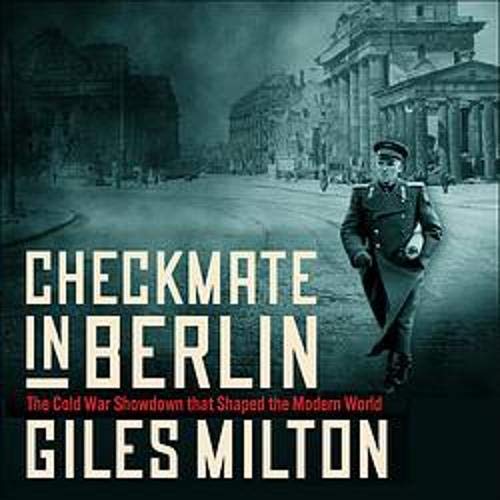 A compulsive listen about the battle for Berlin and control of the Western world in the aftermath of the Second World War from 'the master of narrative history'.

Berlin was in ruins when Soviet forces fought their way towards the Reichstag in the spring of 1945. Streets were choked with rubble, power supplies severed and the population close to starvation. The arrival of the Soviet army heralded yet greater terrors: the city's civilians were to suffer rape, looting and horrific violence. Worse still, they faced a future with neither certainty nor hope.

Berlin's fate had been sealed four months earlier at the Yalta Conference. The city, along with the rest of Germany, was to be carved up between the victorious powers - British, American, French and Soviet. On paper, it seemed a pragmatic solution; in reality, it fired the starting gun for the Cold War.

As soon as the four powers were no longer united by the common purpose of defeating Germany, they reverted to their pre-war hostility and suspicion. Rival systems, rival ideologies and rival personalities ensured that Berlin became an explosive battleground. The ruins of this once-great city were soon awash with spies, gangsters and black-marketeers, all of whom sought to profit from the disarray.

For the next four years, a handful of charismatic but flawed individuals - British, American and Soviet - fought an intensely personal battle over the future of Germany, Europe and the entire free world.

Checkmate in Berlin tells this exhilarating, high-stakes tale of grit, skullduggery and raw power. From the high politics of Yalta to the desperate scramble to break the Soviet stranglehold of Berlin with the greatest aerial operation in history, this is the epic story of the first battle of the Cold War and how it shaped the modern world.

What listeners say about Checkmate in Berlin

I saw a recommendation for this on the web, not an author I'm familiar with, but read the blurb & immediately purchased.

Being mid-point through another book, this was going to tie up with a fortnight in Devon. I have a strong interest in The Cold War, 20th century conflict, espionage, cyber & technology security, both factual & to a lesser degree, fictional.

This book is amongst the best I've listened to. It's forensically researched, bobs along at a perfect pace & is expertly narrated.

It weaves through the widely known facts about immediate/early post-war Germany whist embroidered with some rarities (for the layman). It paints the background for so much of what followed.

In short, if you have an interest in this genre, buy this book. Eagerly awaiting the next project from Giles Milton.

Detailed history at its best

I cannot praise this book enough. When I first bought it I thought it would be the entire story of the divided Berlin & 13 hours cannot tell that 44 year history. But I was so wrong, what Giles does here is in absolute detail tell the story of the first 4 post war years of that troubled city. For anyone with any interest in either WW2 or post-war Europe, this book is a must. It tells the story of the origins of what was to become The Cold War, where it all started. The research and the the telling of that, in an entertaining way, is second to none.

A pity that the narrator cannot pronounce the German names properly when talking about names of people and places.

This book was well received by the critics when published in print and very rightly so. Giles Milton has pitched the content (and narrated it) exactly right. He covers the period between the final month of European fighting, through the Soviet capture of Berlin into the Four Power Commandatura and concludes with the decisive Allied victory achieved by the Berlin Airlift. He does so with the authority of detailed references, a broad chronological viewpoint and a very engaging style. Milton's ability to mix a strategic transatlantic view with that of the ordinary Berliner is very effective. He describes the tensions between the western allies and Russians clearly, whilst simultaneously discussing the role of the USA as first among "equals" without bias or antipathy. Giles Milton's narration deserves particular mention; his style is natural, highly engaging and he makes a very good fist of the foreign language terms. I would highly recommend this to both the casual reader, as well as the modern history buff. Colonel Frank Howley has much to teach current NATO strategists!

Excellent at every level

Fascinating and very accessible history of the events that shaped post war Europe and established the roots of the Cold War that followed. All told with great humanity in a fascinating, fast paced narrative history. Thoroughly recommended.

I loved this book and it was genuinely jaw dropping and read like a thriller. It should be compulsory listening!

Notable Telling of the Battle for Post War Peace

Outstanding book throwing a spotlight on this perhaps overlooked period of recent history but one so very important to the onset of the Cold War and the journey of the European continent in the second half of the twentieth century. It's a story demonstrating as have others before and since, that winning the peace might be as or more difficult than winning the war. Checkmate in Berlin reads like a fast paced novel with a cast of thousands but where the people on the ground in Berlin are the central figures in building a picture of life in the city from the arrival of the Red Army. Were it turned into a movie then it could easily work as a grand sequel to Downfall. Very well narrated, gripping and moving.