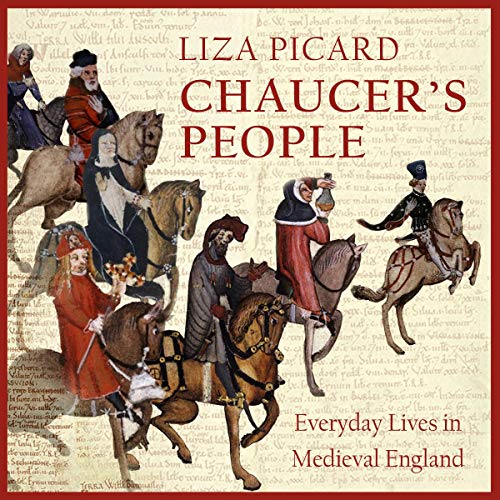 By: Liza Picard
Narrated by: Jennifer M. Dixon
Try for £0.00

The Middle Ages re-created through the cast of pilgrims in The Canterbury Tales.

Among the surviving records of 14th-century England, Geoffrey Chaucer's poetry is the most vivid. Chaucer wrote about everyday people outside the walls of the English court-men and women who spent days at the pedal of a loom, or maintaining the ledgers of an estate, or on the high seas. In Chaucer's People, Liza Picard transforms The Canterbury Tales into a masterful guide for a gloriously detailed tour of medieval England, from the mills and farms of a manor house to the lending houses and Inns of Court in London.

In Chaucer's People, we meet again the motley crew of pilgrims on the road to Canterbury. Drawing on a range of historical records such as the Magna Carta, The Book of Margery Kempe, and Cookery in English, Picard puts Chaucer's characters into historical context and mines them for insights into what people ate, wore, read, and thought in the Middle Ages. What can the Miller, "big . . . of brawn and eke of bones" tell us about farming in 14th-century England? What do we learn of medieval diets and cooking methods from the Cook? With boundless curiosity and wit, Picard re-creates the religious, political, and financial institutions and customs that gave order to these lives.

What listeners say about Chaucer's People

Lisa Picard has made a career out of writing histories of what life was like in various periods. Chaucer’s People seems to be her take on life in medieval England. It bears some comparison, at least as far as intent is concerned, with Ian Mortimer’s book The Time Traveler’s Guide to Medieval England. Picard doesn’t cover the details of city living in as much detail, but she gives a wealth of information about people.

Chaucer’s Canterbury Tales provides the basic structure. Chaucer included travelers from all classes, and so Picard takes each one in turn, refers to Chaucer’s description, and then teases out details that draw on the larger history of the time. For example, the Wife of Bath — her first subject — provides a springboard for looking at the wool trade, the craft of weaving, and the elaborate medieval system of pilgrimages and indulgences. The Cook provides an excuse for including an extensive set of mouth-watering recipes; the Yeoman for the role England’s murderous longbow archers played in the battles in France. The Shipman includes a survey of medieval geography and the travels of Marco Polo and John Mandeville.

It’s a delightful book. Liza Picard has done the research, but she hasn’t lost her sense of humor. And Jennifer Dixon’s sparkling narration strikes exactly the right note.

I read Mortimer’s book on 14th century England and was concerned this would overlap. There was some but not as much as you’d think.