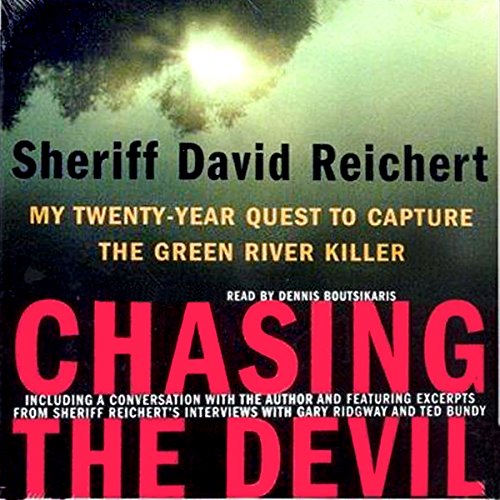 By: Sheriff David Reichert
Narrated by: Dennis Boutsikaris
Try for £0.00

For eight years, Sheriff David Reichert devoted days and nights to capturing the Green River Killer - the most notorious serial killer in American history. He was the first detective on the case in 1982 and doggedly pursued it as the body count climbed to 49 and it became the most infamous unsolved case in the nation. Frantically following all leads, even as more bodies surfaced near the river outside Seattle, Sheriff Reichert befriended the victims' families, publicly challenged the killer, and risked his own safety - and the endurance and love of his family - before he found his madman. But Reichert's hunt didn't end when he finally cornered a truck painter named Gary Ridgway. It would be yet another 11 haunting years before forensic science could prove Ridgway's guilt beyond a shadow of a doubt.

Chasing the Devil is the gripping firsthand account of Reichert's relentless pursuit - a 21-year odyssey full of near-misses and startling revelations. Told in vivid detail by the man who knows the whole story - the man who has stared into the eyes of absolute evil - this is a pause-resisting real-life suspense story of unparalleled heroism.

What listeners say about Chasing the Devil

For such a horrific case over such a long period it could have been so much better. Far too much about the author however his interviews are excellent albeit very creepy. I suppose after you read I’ll be gone in the dark every such book becomes inferior

A reminder of how far forensic science has come

I liked this book for the faith and integrity of the author to see the case through to the end. His patience is a testament to all families out there waiting to know the fate of a lost loved one. His commitment to the the victims as well as the families is a compelling story in its own right. I became interested in this subject after watching a mediocre TV version....the book is better.
More than just a gruesome recount of the deeds of a very sick individual.

This audio book includes actually recorded tape of some of the interviews with the killer. I've never come across another audio book that did that. ingenious!! I hope other true crime writers take note and add the same experience to theirs. Well done!

If you could sum up Chasing the Devil in three words, what would they be?

The book was excellently written and well-narrated. The content of the book is about as dark as you can go. People who are called upon to serve usually live difficult lives, and Sheriff Reichert's life and many others were changed forever. The audiobook includes recorded interrogations with two killers. You can sense the evil while listening and its truly disturbing.

Excellent, as if he was Reichert himself telling the story.

The families of the victims on the day of sentencing.

God bless Sheriff David Reichert and the rest of the brotherhood.

Conveys the frustration and crushing sense of the early days of the investigation, with much detail not covered in other works on this subject.

Hats off to the thin blue line

Awesome ... no that word is not good enough, incredible.

Being able to feel his emotions on working the case and the need to find justice regardless of the time frame was fanminal to read.

The clips of interviews he was a part of is a hardcore bonus.

My only wish is that Reichert was also the narrator.

An excellent work by a dedicated law man.

I really liked it because it is told from the perspective of the man who hunted the Green River Killer for decades. I also listened to Anne Rule's book about the Green River murders and found it full of facts but nothing incomparison this book.

Narration is good. The book is interesting. However, there is a glitch with the Audible book. I've seen other reviews that state something similar, but I had hoped Audible had corrected it by now. The glitch starts in Chapter 9, 9min 48sec.

Idk but I expected a little more

I read so many true crime books and I think I was just expecting a little more from this one.
I don’t love the random music they would play in between some chapters or was corny and in the middle of the book it skipped a bit.

It can be difficult for non fiction books to keep an interest of a reader as the writer cannot take liberties with the story. Whether it the writing or the horrible acts committed by the green river killer, this is a must read that keeps you sucked in.

Fascinating to follow the cops as they go about their business and all that is involved in tracking a serial killer with the countless leads, suspects and evidence.

It is such an interesting book. There are actual voice recordings included they were intense. I am going to look for another book by this author