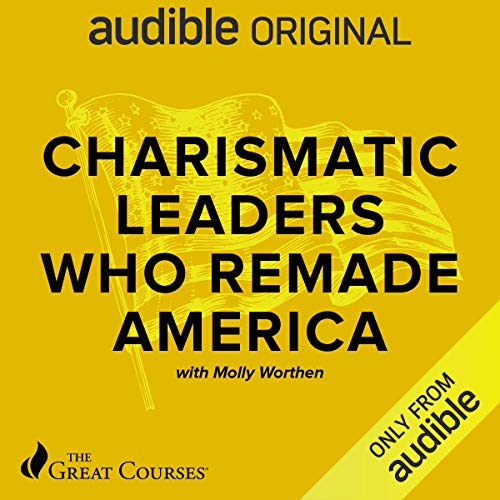 What is that mysterious thing we call charisma? Where does this magnetic quality come from? Why are we so drawn to it? Are people born charismatic - or do they become that way over time? Can charisma be just as much a force for evil as it is for good?

Answers to questions like these are just as important now, in the 21st century, as they were during the earliest years of the American republic. Much of the nation’s history is inextricably linked with charismatic leaders who’ve inspired mass movements, led democratic progress, fanned the flames of violence, and even taken advantage of the human desire for divine inspiration.

Think of Puritan heretic Anne Hutchinson or celebrity statesman, founding father Benjamin Franklin. Think of leadership guru Dale Carnegie or daytime television queen Oprah Winfrey. Think of presidents from Abraham Lincoln to Donald Trump. Each of them, in their own way, remade America through their gripping charisma - an allure that gave them the ability to move crowds and societies.

Delivered by Professor Molly Worthen of The University of North Carolina at Chapel Hill, this Audible Original offers 10 captivating lessons on how these leaders inspired the public as they remade America. You’ll meet a wide range of characters, from politicians and philosophers to billionaires and cult leaders as you get at the heart of how they used their charisma to shape American history. You’ll also trace the evolution of the idea of charisma, from the ancient notion of God’s anointing power to the insights of both modern psychology and leadership studies.

What listeners say about Charismatic Leaders Who Remade America

The course included interesting information about many Academics and historic individuals. However, the course praised Angela Davis and Oprah while making negative statements about Ronald Reagan and Donald Trump. The course was very well organized concerning the concept of charismatic individuals but was quite biased concerning conservative politicians. It was well presented and interesting but was marred by the last couple of chapters.

glad I did not have to buy this

I enjoyed this book until the last chapter. I liked the unbiased way the professor taught until the chapter on Oprah and Trump then her bias got the best of her. while pointing out the many faults of the former president the professor neglected some of the best things that he did for the country but then if she had it would have negated many of the things she put him down for. I would like her to know that it was not illegal for him not to release his taxes and that the country prospered under his presidency. if you are a liberal you will enjoy this book as I did except for the last chapter. this is the only great courses book that I have had a problem with. if she had taken a more unbiased view with this last chapter it would have been five stars all the way across.

Worthen’s command of history and storytelling paints a fascinating and timely narrative of charisma in American history.

Loved it, and pleasantly surprised by how much these lectures made me think about some of America’s most famous figures.

You can tell she hates Donald Trump

She speaks glowingly of all the Socialist/ Marxist charismatic leaders and celebrities of the past and at the very end she gets to Donald Trump and you can hear the hate. Most of these courses are from Liberal College professors so this is expected. I find all these courses quite interesting as long as you take everything with a grain of salt.

This is such a good series! Fun, moving, and just about every emotion in between. The bios are concise. The comparisons are helpful. I highly recommend this series to anyone who might be tempted to think history can boring, anyone who likes psychology or the history of ideas, and anyone who thinks that God works in the world through people.

Song title from the eighties. Exposing Reagan and the media as Charismatic Puppets of Celebrity

This is a thought-provoking, engaging tour of charismatic leaders in American history. Worthen really succeeds in bringing this diverse cast of characters to life and gets us to think more deeply about the elusive phenomenon of charisma. I learned a lot.

Engaging and filled with fresh insight

The course was great. So many popular history books on leadership and charisma are pretty thin gruel, (I’m thinking of Doris Kearns Goodwin in particular) but this was engaging and filled with fresh insight.