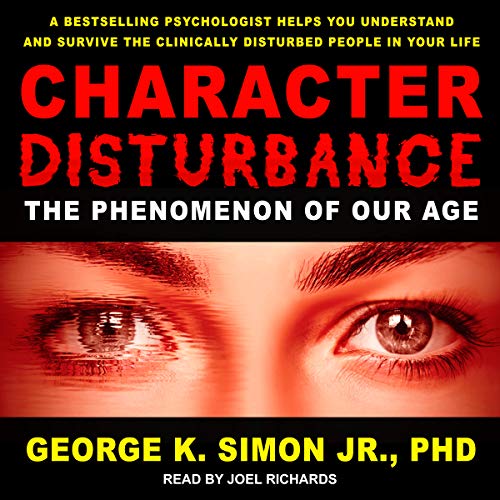 Modern permissiveness and the new culture of entitlement allows disturbed people to reach adulthood without proper socialization. In a book meant both for the general public and for professionals, best-selling author and psychologist George Simon explains in plain English:

What listeners say about Character Disturbance

I very much rate George K Simon’s work and this is an excellent book. The explanations are thorough and clear

The author proclaims his theory throughout this book that character disordered individuals must be understood to have an underdeveloped superego, a deficit of conscience, and profound lack of empathy. Their destructive behavior and selfishness needs to be correctly understood for what it is, and these people need to be accurately identified as character disordered, because effective treatment for these folks is very specific. He talks about how most therapists have the mistaken belief that the underlying cause of their manipulative and harmful behavior originates from neurotic emotional conflicts and past trauma, as is typically the situation with most other personality types.

I think his theory is plausible, and could very well be true. It might be what's actually going on with a certain demographic of people at the most extreme end of the spectrum, the most destructive and antisocial cases. His paradigm may be accurate. If so, his concepts would be important for clinicians to be aware of.

What concerns me about his approach to treating these apparently character disordered clients using the method he describes is its counter therapeutic potential. I worry that addressing treatment in the manner he suggests is appropriate for the character disordered May cause a lot of psychological damage if that client has been inaccurately diagnosed. If someone is mistakenly pegged as being character disordered, but in reality is suffering from the more commonly assumed neurotic conditions that he says most other therapists erroneously assume to be the real issue, then to behave towards a client in the way the author suggests would be very destructive and harmful to that person.

In my own past, I was subjected to behavioral modification when I was a teen, and at this pathetic excuse for a therapeutic boarding school in particular, the dangerously incompetent, misguided and under qualified staff at that facility wrongfully must have assumed that every youth they were dealing with was character disordered. Clearly, most of the students were not, and in fact, they struggled with some other underlying family problems at home or other mental health issue.

Yes, I do understand that most qualified mental health professionals would never so recklessly misdiagnose their entire client base like this particular institution did, and inappropriately assume them to all be character disordered. My opinions are obviously filtered through a unique lens of my own experience that is not at all typical of the general public. But having endured a year of harsh treatment at a behavioral modification program while being viewed as a manipulative, lying, devious, selfish, malicious, intentionally destructive teenager when that was not at all the reality of the situation, I know firsthand how negatively this approach could impact somebody psychologically. If that person has the terrible misfortune of incorrectly being thought to have a character disorder, inappropriate treatment could be very detrimental. If the authors behavioral approach is applied to the wrong person it would likely cause them harm.

I'm not sure if I subscribe to the authors interpretation of what he believes to be the true nature of character disordered individuals. Maybe so. But the potential for an unskilled therapist to inflict psychological trauma on their clients by assuming them to have these diabolical motives or subjecting them to such harsh accusations about what kind of person they know they really are, things could go very badly. Any misunderstanding on the therapists part about who they are actually dealing with could result in unfair accusations and an unhelpful approach. The mental suffering that clients could be subjected to if there is a misdiagnosis makes me very concerned.

Great for therapists and anyone dealing with disordered personalities

I am a professional counselor and also a daughter of a narcissist. This book not only helped me gain incredible amounts of professional insight regarding neurosis vs character disorders but also how to treat theses persons in your office. It also preparedness to tolerate talking with my father and how to manage his constant attempts to get the upper hand and mean jabs at me next time I see him. Thank you so much for this wonderful insightful book!

The basic argument the author makes (without demonstrating it) is that there are three types of people:
- The well adjusted, assertive types (like the author)
- The Character Disturbed ie, the entire population of prisons (which are like luxury hotels, apparently)
- And "neurotics", read liberals, Politically Correct wussbags, traditional psychologists, Cultural Marxists, whatever.

The problem is, politically correct (and slightly pathetic) neurotics are destroying Western Civilization by coddling these Character Disturbed predators who will end up killing us all if we don't do something, as in, right now.

Okay, I'm exaggerating the tone of the book, but not the arguments or conclusions. Come to think of it, there WAS no argument. He just states it as a fact that there are two categories of people (three, if you include the author, who is, of course, the standard of well adjusted sanity): Predators and neurotics. "Traditional" psychology was okay back in the 1890's, but it no longer fits reality. Character disturbed predators are just born that way (the author implies, though he never even attempts to make the case as to why or how this is so). Their behavior cannot be explained by traditional psychology. Not that it matters, to paraphrase a famous politician "Who cares how they got that way, we just need to bring them to heel"

Not that his basic idea is without merit. His cherry picked examples are not unpersuasive, and he is an interesting and compelling writer. He just simply doesn't make his case, or even try to. He comes off as a more coherent, less chaotic Jordan Peterson. He is clearly annoyed at social workers and PC, liberal psychologists who, in his view, coddle and enable criminals. His no nonsense, tough talking, no bull approach is apparently effective ("apparently", because this isn't a scientific book, it's a tantrum. Who knows what actual research might show), but the argument is overshadowed by his repetitive rants against "traditional" psychology (read "psychology") and his endless efforts to peddle his previous book ("by the way, did you read my last book? You should read my last book. Did I tell you it's a best seller?" I lost count after the fifth time he tells us how great his last book is. The ego on this guy. Sheesh)

What really put me over the edge was his constant insistence that all of that Freud based, psychotherapy nonsense, looking for the reason criminals behave that way, touchy feely silliness needs to go out the window. What these people need is to be made to SUBMIT, To God, preferably, or, if you insist on being secular (really, he says this), to a "higher power", but really he means God. In the last third of the book he drops the pretense and goes full Christian culture warrior.

The book is ok as eye rolling entertainment (if you're into that sort of thing) or if you're a tough on crime enthusiast who enjoys his tough on crime bigotry dog whistled. Otherwise, read Erich Fromm instead.

It's what they do, gaslight, manipulate, rage, project, and here's how they do it, you may even recognize some people or groups in this book. Understand how manipulation works to avoid it. Think Eve in the garden when Satan said...."did God really say?"

Outstanding instruction for the times we live in!

The narrator was easy to listen to and conveyed the material with appropriate voice inflection.
As a veteran law enforcement officer approaching retirement their is a crucial need for this instruction. Judges and law enforcement alike could benefit from recognizing and in dealing with these types of personalities.

This author has nailed the portrait of character disturbance. As a survivor/former friend of an individual who is the epitome of a Helion --It made me feel heard, gave me a voice and put a name to many faces I saw come out of 1 human being which literally drained me. This book is so insightful and has helped me make sense of the abuse I endured. Definitely helps with the healing process for anybody going thru a relationship with a covert narcissist or sociopath in their life. its not just labeling--its about character reinforcement. Also helped me to analyze my behavior more constructively. Thank you!

Should be required reading for everyone

At the beginning, this book is very factual and a bit dry as he lays the groundwork for the rest of the book. Stay with it. It’s the most valuable book I’ve read in a long time. It’s helpful in understanding and navigating difficult relationships of all kinds and certainly should be read by every parent. It has wonderful outlines of what to be aware of even as a parent of building solid character in our children and for that, I am exceedingly grateful.

More of this please

This is a necessary resource for those in professions working with Character Disturbances. To neglect use of the guidance presented here would be to place your efforts into fruitless vain. This sizably and substantially clarifies where most of your work should be applied and how to create a framework for clients to initiate and maintain their own change from the outset.

I was married to a narcissist

I would recommend this book to anyone who is going through an abusive relationship. Any one who thinks just any therapist can help. That medication will help you or the abuser. This is about changing your thought process, about taking a real look at yourself and allowing to be open to criticism by a professional who understands why certain people with character disorders exist. I have discovered so much about myself and my ex. I wish I could have known more in the midst of our relationship and researched therapist that had this information. My hopes would have been an eye opening experience long ago. Now I have to deal with his disturbance but from afar and hopefully not too much longer. My hopes is our divorce is final soon. Take notes.