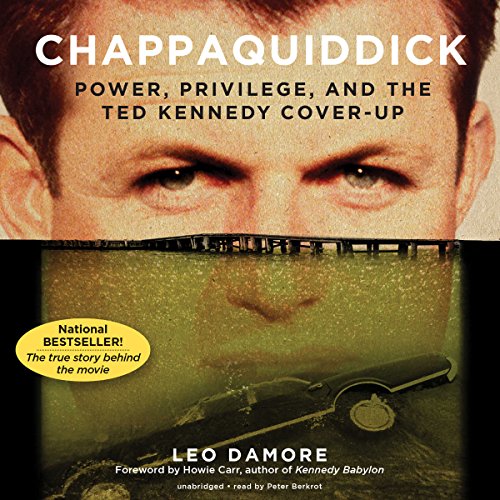 A young woman leaves a party with a wealthy US senator. The next morning her body is discovered in his car at the bottom of a pond.

This is the damning true story of the death of campaign strategist Mary Jo Kopechne at Chappaquiddick and of the senator - a 37-year-old Senator Ted Kennedy - who left her trapped underwater while he returned to his hotel, slept, and made phone calls to associates. It is the story of a powerful, privileged American man who was able to treat a woman's life as disposable without facing real consequences. And it is the story of a shameful political cover-up involving one of the nation's most well-connected families and its network of lawyers, public relations people, and friends who ensured Ted Kennedy remained a respected member of the Senate for 40 more years.

Leo Damore's 1988 national best seller, originally entitled Senatorial Privilege, almost didn't make it into print after its original publisher, Random House, judged it too explosive and backed out of its contract with Damore. Mysteriously, none of the other big New York publishers picked it up. Only when small independent publisher Regnery obtained the manuscript was the book's publication made possible and the true story of the so-called "Chappaquiddick incident" finally told. This new edition, Chappaquiddick, is being released 30 years after the original Senatorial Privilege to coincide with the nationwide theatrical release of the movie Chappaquiddick starring Jason Clarke, Kate Mara, Ed Helms, Bruce Dern, and Jim Gaffigan.

What listeners say about Chappaquiddick

The worst lowlife in this entire saga are tye police chief and the DA who were more concerned with covering Kennedy than with discovering why a young woman was dead. Then you have the sycophants and long-time Kennedy bootlickers, grovellers and hangers on. This excellent book exposes them all for what they were, namely, conspirators in a clearly indictable crime.

Interesting but it was so slow and I was tempted to throw in the towel many times. Would I recommend this book, no I wouldn't.

Excellent, and inquisitive- narration could be better.

This book, on the incident at Chappaquiddick, was one of the better political reads I’ve undertaken in the past few years. Having been extremely interested in the Kennedy family as of late I decided to delve into this book about one of the Kennedys that I knew least about. I was pleased with this choice, an excellent book consisting of almost entire primary sources/direct quotations on the incident and the years following. While the author did an amazing job turning the information at hand into a phenomenal story, the narrator was the only thing preventing a higher score for me. His general narrative voice almost sounded sinister, as if he was trying to make a bad guy/villainous voice, though to his credit he did an excellent job at helping the reader allow different characters to come in and out of play with ease when he changed his tones on those characters (be it Ted Kennedy all the way to Reagan). Overall, this book is highly recommended as not only a companion to the recently released movie of the same title but as one that many Americans should read- to understand the power of political and financial influence, in a story that most Americans don’t know today.

I found this book astonishing I couldn't put it down. It held my interest from the first word to the last word and I give it five stars

How this young ladie's death is never avenged has become one of the ultimate failures of justice. Leo Danmore was a very brave man against an army of unwarranted defenders. How he kept his project intact is a study in morality. So many folks suffer in out institutions for far less crimes.

This book is not only about the misdeeds of Ted Kennedy, and the favors bestowed upon him by political allies, but also about simple local authorities that bungled the investigation. Chief Arena way in over his head, screwed it up from the start. Dr Mills, cared too little for the victim or her family to really do a proper examination or ask for an autopsy. Gargan and Markham come off as sane, but of course they are the sources for this book. Ted Kennedy got hammered then had sex with Mary Jo on Chappaquiddick around midnight away from the cottage. He got spooked when Huck Look spotted him and drove fast down dike road and went off the bridge. He left her to die, then went about like he was going to pretend she was alone in the car. He went to Edgartown to his hotel and woke up without a care in the world. Total scumbag.

Absolutely riveting story of a major turning point in 20th century American history! It is poignant to consider the sacrifices the author made to tell the truth about this incident. The destruction of his livelihood and life by the orchestrated power of the Kennedy family and those who protected the members of that family sets a sickening frame to this tale. It was refreshing to learn of a time when journalists were more honest than they are now. The narration is outstanding! Highly recommended!

I give this book 5 stars. It tells the story of cowardice and corruption that cruelly took the life of a fine young woman.

Just the facts. No life to this book; it was like reading a long newspaper article.

Liberals too can rig the system

Content: well documented instance of legerdemain in pusillanimous service of coward in liberal clothing. Republicans do not have a corner on dirty dealings.

Wonderfully researched and written. Narrator is one of my favorites. I’m interested in the documentary his son is doing about Damore.

A good read considering what happened....

I did struggle to finish, but historically speaking, reached down into the depths and finished.