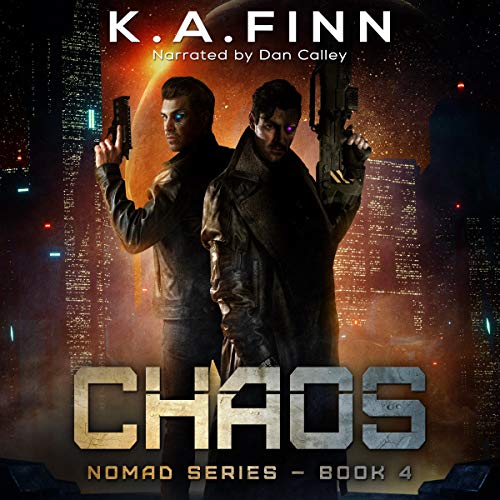 Before becoming a Nomad and a Hunter, Daegan and Brayden Sawyer were just like every other brothers on Foundation Earth. When older brother Daegan leaves for a school trip, their world is torn apart, sending each of them on very different paths.

With his brother declared dead after the transport carrying him disappears, Brayden struggles to deal with the loss, turning to a life on the run from the authorities. After being banished by his family on Earth, he leaves everything he’s known, setting off on a self-destructive path that finds him with no home, no contact with his family, and no future.

When he is arrested and given a death sentence on the infamous Tyrat Prison, he knows he’s run out of options. But Daegan didn’t die. He woke up in hell as the latest recruit of the cyborg project. After spending years being tortured, he finds salvation with the Nomad on their battleship Ares.

With their help, he becomes Gryffin and carves a formidable reputation for himself among the Nomads and the Outer Sector inhabitants. Chaos follows both the brothers as they struggle with their own demons, become Nomad captain, and find themselves in the Outer Sector.

What listeners say about Chaos

"What the hell is going on in your head, boy?"

This is one time that I regret not having read the earlier books in the Nomad series, although it does look as if the events depicted are actually charting the earlier decades before books one to three. As a youth, Gryffin was the sole survivor of The Foundation's experimental project to transform human children into hybrid cyborgs - half human, half machine. The program failed and he was left to die in space. Five years younger, Brayden Sawyer, resents that his life seemed to change so much after the disappearance and presumed death, of his brother, Daegon, then, later, that of his parents: he felt abandoned and resentful. This book follows the two brothers from childhood into adult life with key incidents, seperately recorded and always noting their increasing ages as it progresses, for some twenty plus years.
It is an unusual book, constructed as it is with brief glimpses over a long (two decade) period, and yet written entirely in the present tense, reading much more like a script than a novel and not a device that this reader would normally endorse. And yet it works well here, giving a stark immediacy to each part of the story. The reader gets to know both characters well, emotional response demanded, and yet they both remain somewhat remote and - at least in my case - unlikable but compelling.

Narration of this fourth in the series book was by Dan Calley, not the same person as that of the earlier three. His performance for Chaos was spot on, with separate character voices and, especially, a reading which was simultaneously devoid of emotion but still carried an hint of compassion, warmth, involvement. Quite remarkable, really.

My thanks to the rights holder of Chaos, who, at my request freely gifted me with a complimentary copy of the book via Audiobook Boom. Not yet completely sure how I feel about this book, I have offered a tentative four star rating as it was enjoyable but it felt more like a background fill in than a novel in it's own right. I definitely recommend any potential reader first tries one of the three prequels, as I now intend to do..

It was so worth the wait! Being a Nomad fan, I was super thrilled that the fourth book was released. Chaos is well-plotted, fast-paced, action-packed, exciting with a gripping storyline, capturing and holding my attention from start to end. The character development is brilliantly done; I found them to be uniquely complex, compelling, and incredibly engaging. K.A. Finn's writing is spot-on, clear, precise, and with fascinating and highly imaginative world-building. I was thoroughly entertained and can't wait for Mania.

Dan Calley's narration was outstanding. He captured the characters' personalities and demeanor while portraying the intensity of the scenes. Overall, Chaos was a fantastic listen with a captivating plot and characters, one I'll wholeheartedly recommend. I was given a free copy of this audiobook at my request and have voluntarily left this unbiased review.

What Doesn't Kill Them Makes Them Stronger

The first three books in this series were absolutely terrific and I eagerly awaited the release of Chaos. K. A. Finn's damaged and nearly broken characters are captivating. The manner in which she introduced Gryffin and Brayden and their struggles with their inner demons evoked various emotional responses in me. I often found myself thinking about them and their battles. Her vividly, well-written scenes allowed me to visualize the settings and the poignant events taking place. The plot is well-paced and there is plenty of action, suspense and intrigue. This is an intense, emotionally gripping science fiction story. The narrator of this book is different from the first three books in this series, however I enjoyed the British accent of Dan Calley. I was provided a free review copy of this audio book and am voluntarily leaving this review.

Nice recap of the boys past

This is the second book I have read/listened to by this author and I would like to listen to the others in this series. I previously listened to book 3 of this series ( Perses ). This one is a nice recap of events from when Daegan is ten, Brayden is five, and Daegan leaves on a school trip and does not return. The story is divided into nine parts, each one is with the boys at progressively older ages ending with Dagan at 28 and Braydan at 23. We learn what happened to Daegan, why he was declared dead, about his cyborg implants, the Nomads, about Braedan’s self-destructive coping, the time at Tyrat prison etc.——-

This is the first book I have listened to by this narrator ( Dan Calley ) and I would listen to another. He uses accents to help differentiate characters. He performs more than reads the book and adds degrees of expression as necessary. He has a deeper voice yet is still able to do female and kid voices well. ——-

There are no explicit sex scenes or excessive violence, there is swearing. ——-

I requested and received a free copy of this audiobook for an honest review. I have not heard the prior 3 books in this series, but did not realize this was the 4th book in the Nomad series until the ending credits. This book follows 2 brothers, starting at ages 5 and 10, giving updates on their lives about every 5 years. Events happening to each of them were clearly identified, helping to follow the storyline. The book and narrator were both excellent. I’m going to find the first 3 books ASAP.

Out of this World Chaos!

Chaos written by K.A. Finn is an exciting, edge of your seat type of book that also pulls at one’s heartstrings. Brayden discovers a tortured young man near death in what appears to be a lab on a station. The young man thrives once he is removed, given care and Brayden takes him under his wing. Only because he does not remember who he is, the young man is christened Griffin and begins to establish a reputation for himself among the Nomads. Brayden has a secret and a troubled past that seems to be affecting his decisions and relationships with the Nomads. Griffin is always haunted by his past, present and future. Together they struggle to overcome the chaos that follows them.

Having come into this series at book 4, it only took me a couple of minutes to connect the characters and learn their story. K.A. Finn utilizes strong descriptive words and phrases to tell the story of the two men and their struggles/relationship and evoke the emotion desired for the characters. The plot twists were strong and well-executed. The author, with the help of the narrator, gave each character a tone to reflect their personality – for Brayden, he was strongly assertive and complex by the end of the book and yet sympathetic at first. Griffin grew with each page from being resigned and restrained to pensive. The dialog was well structured and kept the story moving as well.

I enjoyed the book and hope to read more by K.A. Finn in the future.

The audio production of this book was clear and well done, there were no issues.

This book was awarded the AudioBookReviewer Choice Award. This prestigious award is presented to the author of the book whose book is believed to deserve higher than the standard 5 Star Rating.

Disclaimer: This audiobook was provided free of charge by the author, narrator, and/or publisher in exchange for a non-bias, honest review.