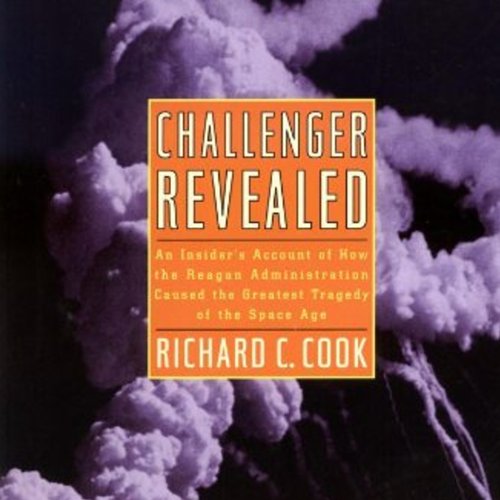 The Reagan Administration pushed hard for NASA to launch shuttle mission 51L, before it was ready. 73 seconds into the launch, the shuttle exploded, killing seven people and leaving a nation traumatized. Richard Cook, the lead resource analyst at NASA for the Solid Rocket Boosters (SRBs), was the first to warn of possible catastrophic failure.

His memo, which detailed astronaut concerns and warnings from the shuttle builders at Morton Thiokol, were ignored by top NASA officials and members of the Reagan administration. In the aftermath of the explosion, NASA launched an investigation to "discover" the cause of the disaster. Though within NASA there was absolute certainty about the O-ring joint failure, they began a cover-up by publicly proclaiming that the cause of the explosion was unknown.

A Reagan administration Commission perpetrated the same lie. And when Richard Cook realized that the Commission was not interested in revealing the truth, he acted as a true patriot and hero and leaked the original O-ring warning documents to the New York Times. His article set off a cascade of disclosures about the events leading up to the disaster, including revelations by Morton Thiokol engineers that they had tried to stop the launch.

What listeners say about Challenger Revealed

how to listen to this audiobook

I strongly advocate listening to this book if you are interested in the Reagan years. We get a fantastic insight into William Rogers who shows up in Nixon era history. Also this book would be an interesting case study for people who want to know how large organisations can make a bad decision, how a project can have conflicting objectives leading to lives lost.

Would you listen to another book narrated by Richard C. Cook?

The author reads his own work, therefore not professionally produced. I recommend the following: put the playback speed to 1.2x then the pauses are less pronounced, and do not listen to any other audiobooks until this one is completed so you get used to the sound quality

thank you Mr Cook for writing this book. You are too humble and you did amazing work. Listeners of this audiobook recognise your contribution and hard work. Personally reading your own book must have been tough but cathartic? Thank you!

This insider's account of the Challenger disaster and the subsequent investigation is gripping and extremely credible. There is no grandstanding here. The author is objective, likeable, and genuinely humble as the catalyst leaking the documents that sparked a chain reaction blowing the lid off what really happened before and after the fateful Challenger launch decision. This is also a book about moral courage. Highly technical in places.

Unfortunately, the production quality is very poor. I can put up with that, but when you hear papers shuffling in the background or tiny fragments where they obviously had to patch sentences. That's not such a big deal but sometimes you can hear the guy swallowing his own spit every 30 seconds. If you need a perfect narrator to get through a book, you might struggle with this one. Nonetheless, if you are interested in the details of the Challenger tragedy it's still an absolute must.

One more thing: if you are worried that that this is a tinfoil hat conspiracy theorist, or a political vendetta against "Ronald Reagen: aka SATAN", I assure you those concerns would be misplaced. This book could hardly be more mild mannered and fair. When he states an opinion, he knows it's an opinion. Super professional and well researched.

Easily one of the best books l have ever read. A magnificent true story of honesty and integrity in the face of bureaucracy coverup and public scrutiny avoidance. A total must read!

If you could sum up Challenger Revealed in three words, what would they be?

What was one of the most memorable moments of Challenger Revealed?

I know a lot about this accident and have read a great deal about it and did not expect to learn much, but I learned a tremendous amount from Mr. Cook's account. This book is not for casual readers, though. The most memorable moment was probably the previously censored transcripts of the Rogers Commission and the context provided.

The problem with this audiobook is really mediocre production values. The author read it, and he was ok, but there's a lot of audible lip smack and other amateurish distractions in terms of the overall quality.

Yes, very much so.

This is a really valuable first-person account that draws on a lot of primary source material not available elsewhere. Don't be fooled by the sensationalist headline; this is a book for level-headed folks interested in facts. This is not a pop history or 'character driven' account of the Challenger 51-L accident, and it is probably not going to excite many readers who are not engineers/aerospace types/people interested in US Government procedural histories/those looking for something light to listen to in the car. For certain readers, though, this is as good as it gets. Mr. Cook's contribution to the historical record here is invaluable.

The book is very dry, almost completely lacking in any interesting anecdotes about the characters involved. It would have made an interesting magazine article.
If this is a subject of special interest to you and especially if you are familiar with the names of the people involved, then it may well satisfy you.

Would you consider the audio edition of Challenger Revealed to be better than the print version?

How director of NASA was indicted by justice department to get him out of job. And the inside story of the Presidential commission.

Reaffirms my belief how our government is inept and corrupt

Narrated by the writer himself, very sincere and well told account of what happened