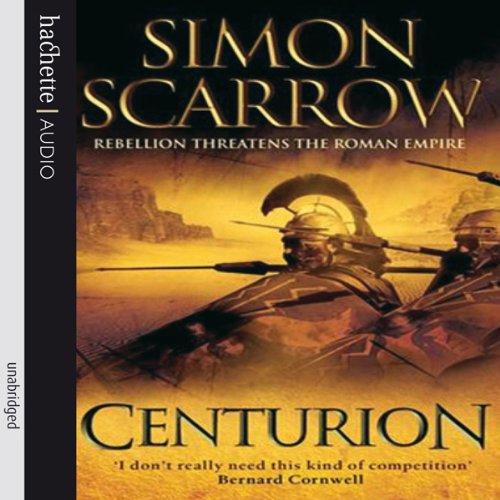 By: Simon Scarrow
Narrated by: Steven Pacey
Try for £0.00

In the first century AD, the Roman Empire faces a new threat from its long-standing enemy Parthia. Parthia is vying with Rome for control of Palmyra an officially neutral kingdom. Palmyra's royal household is on the brink of open revolt, and so a task force under the command of experienced soldiers Macro and Cato is dispatched to defend its king and guard its borders.

What listeners say about Centurion

Unfortunately I realized too late that I had fallen for a trap here. The cover art clearly says "unabridged" - so I assumed this book in the series is just shorter than the others. Turns out, it is in fact the abridged version!
Exchanged it to the full version - the re-listen will be a thing. Also, i like the voice acting on the actual unabridged version (Jonathan Keeble) way better.

Too short was very surprised. I like the story however and will continue the series

Title Not For Sale In This Country/Region
We're sorry, Audible is not authorized to sell this title in your country/region. Please consider another book. In USA. Pissed! This make 2 books in this series, #2 & #8. WTF?!

I love Scarrow's writing, and the story line is good. However, abridgement destroys the writing. Complete or nothing!

I’ve read (or rather listened to) all the Eagle series books and was let down on this one. I don’t know if this was an abridged version or what but there is no development. Everything is rushed. While I’m glad Cato has a love interest, there’s no character development for Julia. The reading time is 4 hours, exactly half the time that all the others had (8). Everything is open ended - like Cato accidentally killing one of his own men in battle. In the previous books everything that happens has some level of significance, but this occurs, and then we never hear of it again. Nothing is resolved. Macro is read like a jolly old fellow instead of the tough, no nonsense fighter than he is in all the other books. Whole thing was a let down. I’m going to listen to the next book in the series and if things don’t improve, will probably stop and move onto something else.

Good book, but a mediocre point in the series

I write this based on listening to the Abridged version, since there is not unabridged version. But you definitely blow past it pretty quick. The voice acting was acceptable, but not amazing. Previous audio books had superior voice acting with better attention to accents and more imagination.

Altogether, a decent read. But not something I'll listen to again unless blowing through the whole series.

Abridged version is a travesty!

Having read the full hardcover version of this excellent book back when it came out, I was sadly disappointed at how gutted it was in this audio version. To reduce a 12+hr book to 3+hrs is just ridiculous. Since I'm going through all of the books in the series again, this time on audio, I have loved them all over again....until I got to this gutted abridged version. What a terrible piece of editing. I was also disappointed in what is supposed to be voice acting but instead wasn't much more than a guy reading the book outloud with a bit of inflection here and there. Why isn't the full version available on Audible like the rest of the books in the series?!

Weakest book in the series

Last time I heard narration this bad I was listening to R. R. Martin's Game of Thrones series. I hope this was an abridged version of the book cause if not I'm very disappointed in Scarrow with this title. Everything was rushed. There was little or no time to build anything up. Easily the weakest book in the series thus far.

Listen to all the other audible books on the series the voice of the Macro and Cato didn't go well with them but I love this series and will read or listen to the rest. Scarrow is the best historical fiction author I have read. This was my least favorite of the series so far but I still loved it.