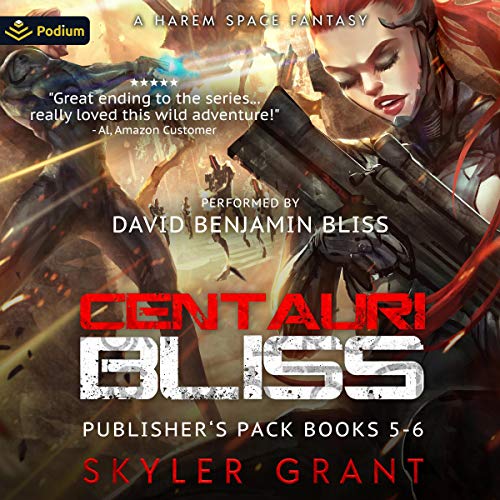 By: Skyler Grant
Narrated by: David Benjamin Bliss
Try for £0.00

Contains books 5 and 6 of the Centauri Bliss series.

For the first time since the death of the Emperor the Imperium has new leadership and new strength while the clans are on the move. The Centauri Bliss seeks out new technology, new power, new worlds to add to the clan of thieves to prepare themselves for what is to come.

The Imperium is pursuing terrifying experiments even as the Clans close in on Imperius. The crew and family aboard the Centauri Bliss has grown and is made up of those on both sides of the conflict, and have developed worlds of their own in need of protecting. With plans to finally withdraw themselves from the conflict, they have one last chance to try to set things right.

Not Bliss, But definitely Action Packed

Really enjoyed this story, and was a breeze to listen. "this is a bad Idea Captain " Made me smile at the beginning of each book. I really liked the narrator. He made all the characters come to life and was really good at making the bad guys sound BAD! really glad I bought the whole story.

To many voices to manage

The narrator does an amazing job for 90% of the characters. There are a couple that just sound horrible. It could be easily fixed if there was a narrating duo.

Sad to see the end of such a great series!

I've been hooked on this series ever since I read the first chapter of book 1. If you liked the show Firefly, then you'll probably like this series. The books are well written and fast paced enough that they never drag. Do yourself a favor and check this series out; you won't regret it!